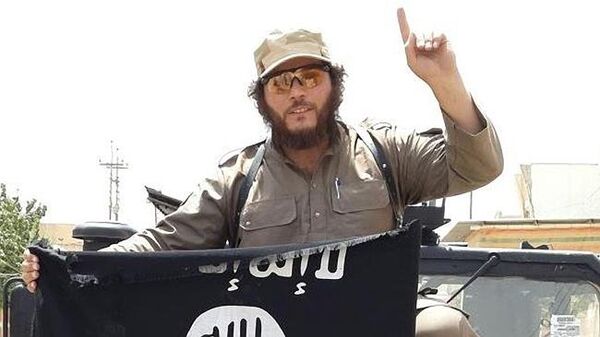 © Facebook
Subscribe
Australian jihadist Khaled Sharrouf, who fled his country to become an ISIS fighter, uploaded a picture of a 7-year-old boy believed to be his son holding a severed head of a Syrian soldier to his Twitter page captioned with words “That’s my boy”, The Australian newspaper reports.

MOSCOW, August 12 (RIA Novosti) – Australian jihadist Khaled Sharrouf, who fled his country to become an ISIS fighter, uploaded a picture of a 7-year-old boy believed to be his son holding a severed head of a Syrian soldier to his Twitter page captioned with words “That’s my boy”, The Australian newspaper reports.

Peter Nettleton, the child’s alleged grandfather and father to Sharrouf’s wife Tara Nettleton, urged the government to take action, according to the newspaper.

“I was gutted, totally gutted,’’ Nettleton recalls.“Can't the government do something to pull these kids away from that man?” he asked, as cited by The Australian.

The photograph taken in Syria shows a young boy dressed in European clothes, wearing a baseball cap and barely able to hold a man's severed head. This caused a wave of condemnation and horror in the world.

The ISIL is a threat to the civilized world, US Defense Secretary Chuck Hagel said at a press conference ahead of the annual Australia-United States Ministerial Consultations in Sydney.

“I think reflected on the local newspaper I saw this morning, with the picture on the front page, it’s pretty graphic evidence of the real threat that ISIL represents.” Hagel commented.

Australia’s Minister for Defense Hon David Johnston called the picture “an act of a lunatic” during his appearance at ABC’s morning show, adding that it is “a shocking misrepresentation of Islam”.

"I'm very upset about this sort of thing completely coloring our view of Muslims," Johnston said.

Australian Prime Minister Tony Abbott said in an interview with ABC’s daily morning current affairs program on Monday that everyone has to appreciate that the Islamic State is more than just a group, it’s a terrorist army seeking to become a terrorist nation.

“And this does pose extraordinary problems, extraordinary problems, not just for the people of the Middle East but for the wider world and we see more and more evidence of just how barbaric this particular entity is, I believe there are more photographs in newspapers in Australia today of the kind of hideous atrocities that this group is capable of,” Abbott said.

The Prime Minister also announced that Australia is planning to join the humanitarian mission in Iraq and to airdrop provision to the civilians surrounded by Islamic State fighters.

“We do have some Hercules C1-30 aircraft in the Middle East and we have a C-17 that's bringing humanitarian supplies from Australia in the next day or so, and we'd expect to join that humanitarian airlift should it be needed sometime later in the week,” he stated.

Just a few days before the infamous photograph was posted, Tony Abbot addressed his nation with a message, saying that a growing number of Australians are traveling to various conflict zones including Iraq and Syria with the intention to “do harm” and “bring back deadly skills to Australia”.

Because of this threat, the country’s government announced a series of measures aimed at strengthening national security.

Abbot stressed that the government doesn’t need a constant inflow of new information and wants only to “ensure that the limited data already collected can be accessed by authorities to build a case against those who have or are planning to commit crimes.”

According to officials, around 150 citizens of Australia have already joined rebellious groups in foreign countries, namely Iraq and Syria, reports Al Jazeera.

Before Sharrouf fled the country to join the Islamic State using his brother’s passport, he served almost four years in prison over a conspiracy to organize a terrorist attack in Sydney in 2005.