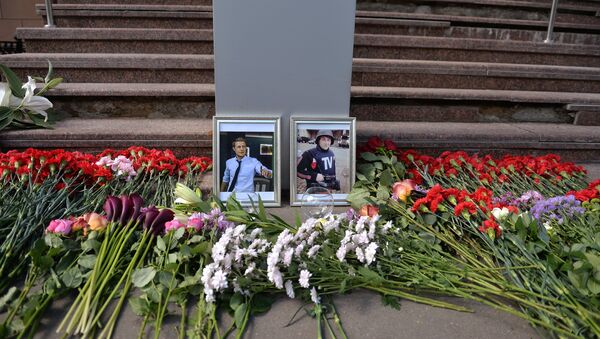 © RIA Novosti . Vladimir Pesnya
/
Go to the photo bank
Subscribe
The information on incidents, involving Russian journalists in Ukraine between March and August 2014.

MOSCOW, August 13 (RIA Novosti) - A source in eastern Ukraine reported over the phone that Rossiya Segodnya photojournalist Andrei Stenin, who went missing in the Donetsk Region on August 5, has been seized by the Ukrainian law enforcement bodies and is being held by the Ukrainian Security Service (SBU) in Zaporizhia.

The information on incidents, involving Russian journalists in Ukraine between March and August 2014, can be found below.

On August 5, Rossiya Segodnya International Information Agency received Stenin’s last report. The agency has not been contacted by him since then. Stenin worked in Donetsk, Slaviansk, and other cities in eastern Ukraine. On August 8, there was received the information that Stenin was seized by Ukrainian law enforcement bodies and was held by the SBU in Zaporizhia.

On August 3, journalists from the Zvezda TV channel came under fire at the Gukovo checkpoint on the Ukrainian border with the Rostov Region, Russia.

On August 1, the Russia Today (RT) TV channel reported that a journalist from its Ruptly video agency, Alina Yeprimyan, was deported from Ukraine, while the footage she had made was destroyed. The lack of accreditation was quoted as the official reason for her deportation.

On July 25, a film crew from the Rossiya-24 TV channel came under fire from Ukrainian forces at the Primiussky farmstead in the Rostov Region.

In the early morning of July 23, four journalists, including RT’s part-time employee Graham Phillips, disappeared in the area of the hostilities in eastern Ukraine. The SBU later reported that it had detained Phillips and informed him that he would be deported and banned from entering the country for three years after his interrogation.

On July 3, a camera crew of Channel One came under fire in Slaviansk. The hotel where the journalists were staying was destroyed in a bombing. They were filming at the time and the camera was on during the explosion.

On July 1, journalist Denis Kulaga and cameraman Vadim Yudin from REN TV were wounded in the Luhansk Region. A shell exploded next to the correspondent, impairing his hearing. Yudin was also shell-shocked.

On June 30, cameraman of the Russian Channel One Anatoly Klyan was killed by law enforcement bodies in Donetsk. He was on the bus with the mothers of soldiers who demanded the disbandment of a military unit. He was wounded in the stomach and died on the way to the hospital.

On June 24, a film crew from the Russian Channel One came under mortar fire near Slaviansk., but no one was hurt.

On June 17, Vesti correspondent Igor Kornelyuk and video engineer Anton Voloshin were killed during a mortar shelling of the Metallist and Mirnoye villages near Luhansk in eastern Ukraine. They were buried at the Troyekurovskoye Cemetery in Moscow. President Vladimir Putin awarded them posthumously with Orders of Courage for their “courage and heroism displayed while performing their professional duties.”

On June 16, a group of journalists came under fire by unknown attackers in the suburbs of Slaviansk. The group included RIA Novosti photographer Andrei Stenin, Ruptly contractor Andrei Krasnoshchekov and Komsomolskaya Pravda correspondents Alexander Kots and Dmitry Steshin. No one was hurt in the shelling.

On June 14, the Zvezda TV channel reported that its journalists had been detained in Ukraine. Correspondent Yevgeny Davydov and sound engineer Nikita Konashenkov were detained by the UBS in Dnipropetrovsk. On June 16, they were released and returned in Moscow.

On June 11, journalists from the Russian Channel One film crew came under shelling in the village of Semyonovka near Slaviansk. No one was hurt.

On June 6, journalists from the Zvezda TV channel Andrei Sushenkov and Anton Malyshev were detained at a checkpoint near Slaviansk. They were accused of collecting information about the SBU checkpoint. The night of June 9, they were released and transferred to the Russian side.

On June 6, People’s Deputy and leader of Ukraine’s Radical Party Oleg Lyashko ousted a film crew from the Russian VGTRK from the Verkhovna Rada building. He said he had deprived the journalists of their accreditation with Verkhovna Rada and accused them “of lying and spying for Russia.”

On May 29, members of a camera crew from the Rossiya 24 TV channel were shelled in Donetsk, where they were working near the airport. No one was hurt.

On May 27, a film crew from the MIR 24 TV channel came under a sniper attack in Donetsk. The crew was not hurt and continued working as usual.

On May 24, a VGTRK holding film crew, led by special correspondent Alexander Rogatkin, was forced to leave the train in Konotop in the Sumy Region. The journalists were supposed to cover the presidential elections in Ukraine, but were detained despite being accredited with the Ukrainian Central Election Committee.

On May 22, a car of the LifeNews TV company came under fire, but no one was hurt.

On May 20, Ukrainian police detained in Mariupol Graham Phillips, a British journalist from the RT channel. He was released the night of May 22.

On May 19, a special correspondent from the VGTRK holding, Kseniya Kibkalo, said on the Rossiya 24 channel that the Ukrainian police suggested that her colleagues leave the country by May 19 and threatened to launch criminal proceedings against them.

On May 18, the Ukrainian Defense Ministry reported on the detention of LifeNews journalists Oleg Sidyakin and Marat Saichenko near Kramatorsk. The Ukrainian authorities accused them of assisting “terrorism” in the east of the country. On May 25, the journalists were set free and flew to Grozny before returning to Moscow.

On May 15, a film crew from the TVC television channel, which was supposed to cover the presidential elections in Ukraine, was denied entry into the country. The crew was detained by passport control officials at Borispol Airport under the pretext of an “unclear purpose of their visit.” On May 6, another TVC camera crew led by Vera Kuzmina arrived in Kiev for the same reason but was also denied entry.

On May 13, the Ukrainian military opened fire at a LifeNews camera crew in the village of Oktyabrskoye near Kramatorsk. Oleg Sidyakin, Marat Saichenko and Marat Abulkhatin managed to find shelter, and no one was hurt. On May 7, Ukrainian law enforcement officers opened fire at LifeNews journalists near Slaviansk.

On May 9, a 23-year-old Ruptly contractor, cameraman Fyodor Zavaleikov, was wounded during clashes in Mariupol. He was rushed to a local hospital with a serious gunshot wound in the stomach and underwent an urgent surgery. On May 12, he was transported to Moscow for another surgery and was released from the hospital in late May.

On April 25, unidentified individuals detained LifeNews journalist Yulia Pustoplesnova (Shustraya) and LifeNews cameraman Mikhail Pudovkin. They were attacked by 30 people in masks as they headed to interview activist Topaz.

On April 24, Stepan Chirich from the First Production Company, which makes the Central Television program with Vadim Takmenyov for the NTV channel, left for the city of Pershotravinsk in the Dnipropetrovsk Region and was detained in Ukraine.

On April 16, a camera crew from the Rossiya 24 TV channel, including correspondent Yevgeny Reshetnev, cameraman Sergei Truskov and engineer Vadim Klivanov, was detained without explanation near the city of Izyum. The group was released on April 17.

On April 8, RIA Novosti photo correspondent Alexei Kudenko was sent to cover the events in southeastern Ukraine, and was denied entry by passport control officials in the Donetsk Airport and put on a flight back. On the same day, Ukrainian border guards forced RIA Novosti correspondent Andrei Malyshkin to get off the train. He was denied entry “due to a lack of funds to stay in Ukraine.”

On the same day, officials from the Kharkiv regional state administration did not allow a RIA Novosti correspondent to join a group of journalists for a tour around a building that was freed at night from the independence supporters who had staged a rally there.

The night of April 8, Ukrainian border guards detained Zvezda TV channel commentator Maxim Dodonov in the Donetsk Airport. He was kept in the so-called “recreation room” for more than seven hours and then offered to buy a business-class return ticket at his own expense. On the plane, he was joined by his fellow colleagues from St. Petersburg’s 5th Channel and the Podmoskovye Channel. A LifeNews correspondent was also deported from Ukraine the same day.

On April 7, the Ukrainian border guards denied entry to two journalists from the Forbes Russia magazine. They were taken off the train at the Kazachya Lopan station and sent to the Russian city of Belgorod on the first train bound for Russia. The same day, RT’s Ruptly correspondent Andrei Ivanov was detained and interrogated at the Donetsk Airport.

In April, a correspondent of the online publication Segodnya.Ru, Alexei Khudyakov, was abducted by masked people in central Donetsk. Having introduced themselves as SBU employees, they took the journalist to a forest where they forced him to sign a document, saying he agreed to work as an SBU agent in Moscow.

On March 7, a film crew from the TVC channel, including correspondent Mikhail Shekoyan, cameraman Maxim Pankin and his assistant Anatoly Zanin, was deported from the Donetsk Airport. Another camera crew, consisting of correspondent Garry Knyagnitsky, cameraman Sergei Koreshkov, and sound engineer Dmitry Anisimov from NTV channel, as well as camera-control engineers from Channel One Andrei Konik and Oleg Pudov, was also turned back.