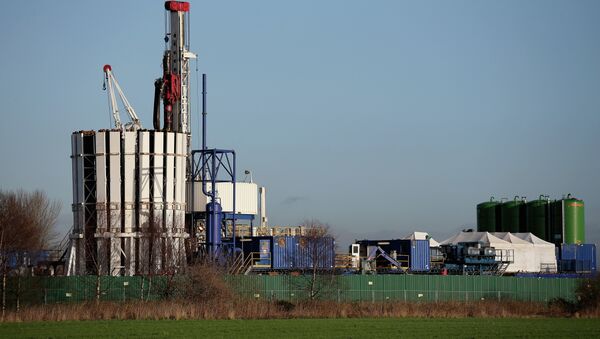 © Getty Images/ Fotobank.ru
Subscribe
The release of a UK draft report examining the impact of developing shale gas deposits through hydraulic fracturing, or fracking, on house prices and local services has been criticized for the redaction of large amounts of information, The Guardian reports.

MOSCOW, August 11 (RIA Novosti) - The release of a UK draft report examining the impact of developing shale gas deposits through hydraulic fracturing, or fracking, on house prices and local services has been criticized for the redaction of large amounts of information, The Guardian reports.

"The number of redactions would be almost comical if it weren't so concerning. What are the economic, social and environment impacts and effects upon housing and local services, agriculture and tourism that the government is so keen to withhold from us? The implications of fracking for rural communities are vast. It is critical the public knows the facts: absolute transparency is essential – censorship should not be an option," the Green Member of Parliament (MP) for Brighton Pavilion, Caroline Lucas said.

The Shale Gas: Rural Economy draft report, written in March, describes the results of a study conducted by Whitehall officials. Sections reviewing the impact on housing demands and property prices were subject to most redactions. The executive summary of the draft states that the majority of information comes from research conducted in the United States, which has significantly expanded its fracking industry in recent years.

"One couple had agreed a house sale, but just as the plans were announced in February their buyers negotiated a reduction of 14.5% due to the uncertainty over fracking," Labor MP for Worsley and Eccles South, Barbara Keeley said. "There are a couple of other properties on the market but not selling. Everyone asks about the fracking plans,” she added.

The draft report cites a 2010 study in Texas that concluded houses valued at over $250,000 within 1,000 feet of fracking well sites saw reductions in value of three to 14 percent. Keeley told The Guardian that the government should plan to compensate individuals whose homes lose value due to fracking.

A letter published with the report stated that the redactions in the draft were made to allow officials to discuss fracking without the influence of premature criticism of the industry.

The report was published by the Department for Environment, Food and Rural Affairs after the UK government opened up two-thirds of England to a new round of bidding for fracking licenses, according to The Guardian.