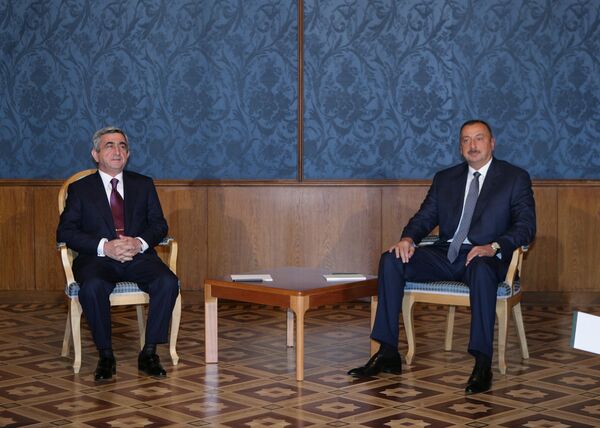 The presidents of Armenia and Azerbaijan said they were ready to continue the dialogue on the crisis in Nagorno-Karabakh following a meeting in the Russian southern resort city of Sochi, Russian Foreign Minister Sergei Lavrov said Sunday.

BOCHAROV RUCHEY (SOCHI), August 10 (RIA Novosti) – The presidents of Armenia and Azerbaijan said they were ready to continue the dialogue on the crisis in Nagorno-Karabakh following a meeting in the Russian southern resort city of Sochi, Russian Foreign Minister Sergei Lavrov said Sunday.

“The meeting was important, the presidents have confirmed their commitment to the principles outlined by the co-chairs [of the OSCE Minsk Group] … at the presidential level and these principles imply a necessity to seek a peaceful solution while respecting the territorial integrity and the right of the peoples to self-determination,” Lavrov stressed.

“The presidents expressed preparedness to continue dialogue at the presidential level and the Russian Federation as one of the co-chairs will assist [with this process],” the minister added.

Earlier on Sunday, a trilateral meeting between the presidents of Russia, Armenia and Azerbaijan focused on the situation in Nagorno-Karabakh took place in the Southern Russian resort city of Sochi.

Lavrov said that during negotiations the presidents discussed the need to implement the decisions by the Organization for Security and Co-operation in Europe (OSCE) and the contact group.

“The presidents ordered the countries’ prime ministers to continue this work along with efforts to elaborate practical aspects of the conflict settlement, which have not been agreed on yet,” Lavrov said.

The conflict between Azerbaijan and Armenia over Nagorno-Karabakh has not abated since 1988 when the Nagorno-Karabakh Autonomous Region with predominantly ethnic Armenian population announced its withdrawal from the Azerbaijan Soviet Socialist Republic.

Following armed actions in 1992-1994 that left some 30,000 people dead, Azerbaijan lost control over Karabakh and the adjacent territories. Nagorno Karabakh declared independence but does not participate in negotiations between Armenia and Azerbaijan which are still technically at war after a conflict over the disputed region.

A ceasefire was agreed on in 1994, but a permanent peace deal has still not been signed. Since 1992, the OSCE Minsk Group and its co-chairs Russia, France and the United States have been negotiating a lasting and peaceful settlement of the conflict.