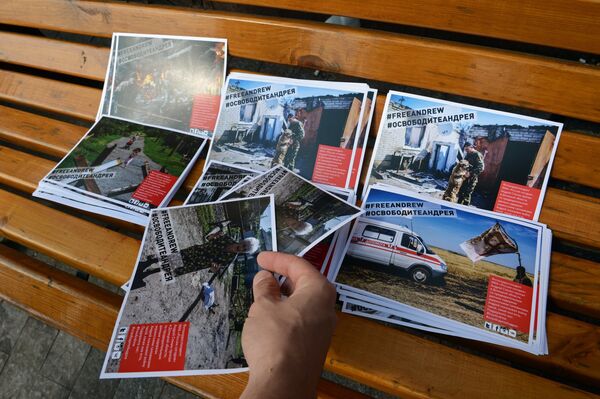 © RIA Novosti . Evgeny Biyatov
/
Go to the photo bank
Subscribe
The display of photographs, taken by Andrei Stenin, a photographer of the International Information News Agency Rossiya Segodnya, opened near the agency’s headquarters on Sunday.

MOSCOW, August 10 (RIA Novosti) – The display of photographs, taken by Andrei Stenin, a photographer of the International Information News Agency Rossiya Segodnya, opened near the agency’s headquarters on Sunday.

The photo show became part of the #freeAndrew campaign, launched in support of the missing journalist. Earlier today, volunteers distributed, photos taken by Stenin, near RIA Novosti information agency headquarters next to metro station Park Kultury, in Pushkin Square and at the entrance to Gorky Park. Stenin’s colleagues had also issued a video address on YouTube with a call to free the photographer.

“Andrei Stenin is a brilliant master, brilliant photojournalist. The present campaign is aimed at drawing attention to Andrei’s problem and to the issue of security of journalists working in any war zones, especially in Donetsk. The journalist must have a privilege of full immunity in all situations, which is not happening at the moment, as we can see," Alexander Shtol, the head of Rossiya Segodnya’s photo department, said at the opening of the exhibition.

Andrei Stenin, who was working in Donetsk, Slaviansk and other eastern Ukrainian cities, went missing on August 5. On Friday, an informed source told RIA Novosti that the photographer was being held by the Security Service of Ukraine (SBU) in the Zaporizhia Region in southern Ukraine. A spokesman for the local SBU office denied such reports.

Kremlin spokesman Dmitry Peskov said on Saturday that Russia was making all possible efforts in coordination with the corresponding agencies to secure Stenin’s return.

Rossiya Segodnya Director-General Dmitry Kiselev on Friday called for the release of the agency’s photographer and emphasized the humanitarian nature of Stenin’s work.

On Saturday, Rossiya Segodnya submitted an application to the Ukrainian Interior Ministry with a request to take urgent measures to find Stenin. The office of the OSCE Representative on Freedom of the Media said on Friday that it was checking reports on Stenin’s disappearance. The Russian Embassy in Ukraine is looking into the circumstances of the incident. The American Committee to Protect Journalists (CPJ) is also investigating the case.