Estonia's President Criticizes Switzerland for Lack of Sanctions Against Russia 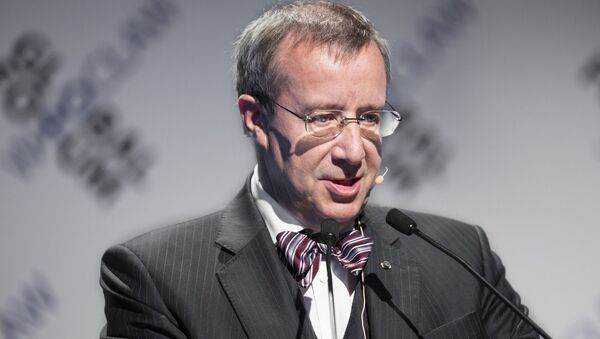 "Switzerland must live with the criticism that it has only dispensed with its own sanctions to gain an advantage for its banking sector," Ilves told the paper.

The president did not specify whether Estonia, as part of the European Union would put pressure on Switzerland. He noted, however, that other countries that claimed to be neutral, such as Sweden and Ireland, ended up supporting the sanctions.

"The concept of neutrality is for me as empty today as ever before," Ilves said.

Swiss politicians say they are afraid of the effect the EU sanctions against Russia may have on their country.

"Sanctions punish Russian citizens and businesses. Nonetheless, it is often forgotten that such sanctions have a negative effect on Swiss companies," a representative of Swiss People's Party Alfred Heer, as quoted by Sonntags Zeitung.

"Such foreign policy does not suit Switzerland," a member of the National council from the Green Party Geri Müller told the paper.

Switzerland is not part of the European Union and is not required to support the full package of restrictive measures, imposed by the EU on Russia. However, since Switzerland belongs to the Schengen zone, some of the sanctions spread on its territory.

The United States, the EU and ally countries have introduced several rounds of targeted sanctions against Russian companies and individuals since Crimea’s reunification with Russia in March. In a more recent incident in July, the United States and the EU introduced sectoral sanctions targeting defense, energy and banking sectors of the Russian economy.

Switzerland announced Tuesday it had added 26 Russian and Ukrainian individuals and 18 organizations to its sanctions list, bringing the total number of individuals affected to 87 and the number of entities to 20.

Moscow stressed that Russia was never involved in the Ukrainian conflict and has repeatedly called the measures counterproductive, saying the sanctions could have a boomerang effect on European economies.

On Thursday, Russia responded by introducing a one-year import ban on agricultural and food product imports from the countries that have imposed sanctions on Moscow over the Ukrainian crisis, namely Australia, Canada, the European Union, the United States and Norway. The list includes meat, poultry, fish, seafood, milk, dairy products, and fruit and vegetables.