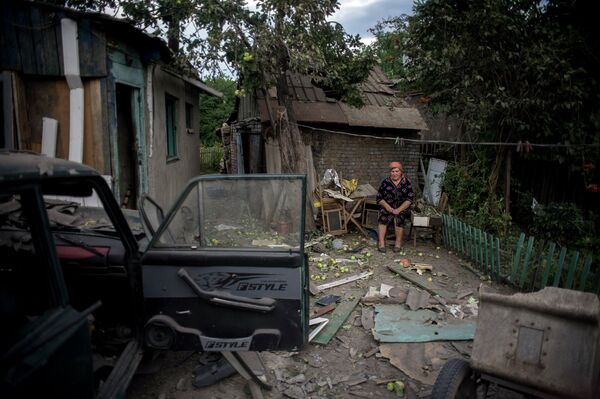 “Innocent civilians trapped in the fighting continue to lose their lives,” he said Friday.

Ban added that “restoring vital infrastructure, not least for water and sanitation, is essential for a return to normal life” and that “the number of those who are fleeing the area continues to grow.”

UN humanitarian official John Ging said on august 5 at an urgent meeting of the UN Security Council, that in Donetsk and Luhansk “the water supply is reduced to a few hours a day. Health supplies are running low, and an estimated 70% of health personnel have fled.”

Ging, the director of operations of the UN Office for the Coordination of Humanitarian Affairs, told the Security Council that “since the start of the year 168,677 Ukrainians are registered as having crossed into Russia, with nearly 60,000 of these having applied for refugee status and a further 115,952 having applied for other forms of legal stay.”

Ging acknowledged “this is not the full picture as many Ukrainians that have fled their homes do not register with Ukrainian authorities or officially apply for assistance. The Russian authorities and UNHCR are reporting that 740,000 people have crossed the border since the start of the year.”

Russia's Ambassador to the UN Vitaly Churkin, who requested the urgent Security Council meeting, said Russia is ready to provide humanitarian assistance to Ukrainians “on our own.” He cited Foreign Minister Sergey Lavrov's August 4 proposal of humanitarian convoys.

On Friday, Ban said that the “United Nations has mobilized quickly, in coordination with key humanitarian actors on the ground, to assist Government-led efforts to respond effectively to the emerging needs. We continue to scale up our preparedness and stand ready to increase our support to Ukrainian relief efforts, as required.”

Ban stressed he “will continue to actively and closely follow the situation. If there is further deterioration of the humanitarian situation, or if nationally-led response efforts are not sufficient to meet humanitarian needs, the UN is ready to consider additional measures of support. At this stage, the situation is being handled appropriately by the Government of Ukraine, in coordination with international partners.”

On the political situation, Ban appealed “to all parties to redouble their efforts toward achieving a lasting and peaceful political solution to the conflict in Eastern Ukraine.” He said, “this is the most effective way to save lives and avoid a humanitarian crisis.”

The ongoing military operation was launched by Kiev in mid-April to suppress the growing independence movement in southeastern Ukrainian regions of Luhansk and Donetsk.

Russia has repeatedly urged Kiev to stop the bloodshed.