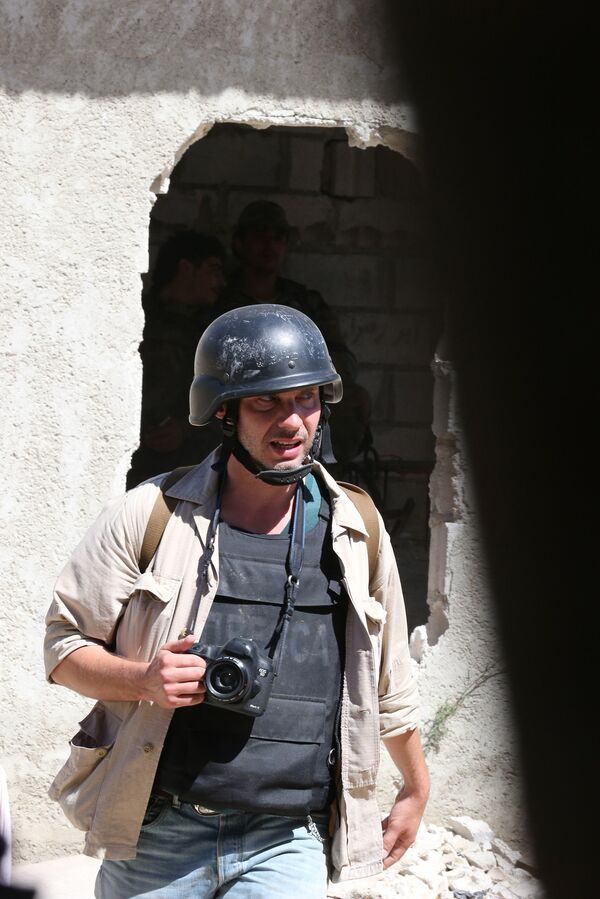 © ITAR-TASS/Mikhail Pochuev
Subscribe
The International Information Agency Rossiya Segodnya is launching a campaign #freeAndrew to support its photographer Andrei Stenin who went missing in the combat zone in Ukraine’s east.

The campaign will start at noon (08:00 GMT) on Sunday in Moscow next to Park Kultury metro station and on the Pushkin Square. Volunteers will hand out 5,000 photos made by Stenin urging people to join the campaign in social networks and use the hashtag #freeAndrew

"First of all, we demand the release of Andrei Stenin and also his proper treatment. The circumstances of Ukrainian security force' previous detentions of journalists from Russia and other countries suggest that they [journalists] could be treated improperly,” Kiselev said.

"Andrei was performing his professional duties, working on both sides of the front line in eastern Ukraine. His works, praised by colleagues and the public, have allowed the world to learn about the sufferings Ukraine and its people are going through now, no matter which side they are on," Kiselev added.

The director general expressed hope that his foreign colleagues would back calls to release the Rossiya Segodnya journalist.

"We call on our colleagues from Russia and other countries to back our demand for Stenin's release and expect human and professional solidarity," Kiselev said.

Andrei Stenin, a military news photographer of the Rossiya Segodnya International Information Agency, went missing in eastern Ukraine on August 5, while covering events in Donetsk, Slaviansk and other local cities.

Stenin is currently being held by the Security Service of Ukraine (SBU) in the southern region of the country, according to a source. "He was captured by the Right Sector militants... According to our information, he is currently held by the SBU in Zaporizhia," the source said.

Russia's Embassy in Ukraine and the American Committee to Protect Journalists (CPJ) are looking into the circumstances of the incident.

The office of the Organization for Security and Co-operation (OSCE) Representative on Freedom of the Media is also checking the information regarding Stenin’s disappearance.

Former Russian Human Rights Commissioner Vladimir Lukin expressed his readiness to travel to Ukraine to assist in releasing Andrei Stenin. The official added that journalists should be untouchable, as there are rules regarding the treatment of media workers in battle zones.