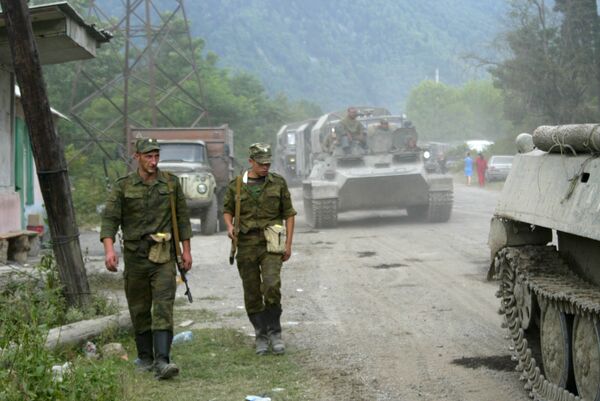 Friday marks the sixth anniversary of Georgia’s deadly ground operation against the then breakaway republic of South Ossetia, which killed hundreds of innocent people and led to the state’s recognition on August 26, 2008.

MOSCOW, August 8 (RIA Novosti) – Friday marks the sixth anniversary of Georgia’s deadly ground operation against the then breakaway republic of South Ossetia, which killed hundreds of innocent people and led to the state’s recognition on August 26, 2008.

After an armed conflict that lasted until the summer of 1992, Georgia lost control of South Ossetia. Its independence was partially recognized in 2008, while Tbilisi has continued to regard the territory as a core part of Georgia. The only thing that Georgia could offer the Ossetians was some form of autonomy.

The situation in deteriorated rapidly in the evening of August 1, 2008. The city of Tskhinval and a number of populated localities in South Ossetia came under mass artillery fire from Georgia. Fighting ensued with small arms, grenade launchers and mortars in over the course of a few hours, which led to the first casualties and considerable damage. South Ossetia started evacuating civilians to North Ossetia, with 2,500 people leaving their homes during the first wave.

On August 2, Georgian Reintegration Minister Temur Yakobashvili paid a visit to South Ossetia and met with OSCE observers, Georgian Defense Ministry’s Gen. Mamuka Kurashvili, chief of staff of peacekeeping operations, and Gen. Marat Kulakhmetov, commander of the Combined Peacekeeping Forces (CPF) in South Ossetia. He went on record as saying that the Georgian authorities saw no alternative to direct negotiations between Tbilisi and Tskhinval and were ready to start talks without preconditions. He stated that the Georgian authorities would do everything to achieve a political settlement.

On August 3, Georgia continued assembling its forces near the South Ossetian border. An artillery column composed of a battalion of D30 guns and two mortar batteries of the Georgian Defense Ministry’s 4th Motorized Rifle Brigade headed to Tskhinval from the military base in Gori.

The Russian Foreign Ministry declared that the threat of large-scale military operations between Georgia and South Ossetia was increasingly real.

CPF deputy commander Vladimir Ivanov reported that the peacekeeping contingent had been placed on red alert. The peacekeeping force at checkpoints stepped up surveillance. More observation posts were added.

On the night of August 4 the South Ossetian Information and Press Committee reported that Georgia launched two attacks on posts manned by local law enforcers.

A Georgian Interior Ministry report stated that the Ossetians had fired at a Georgian police station.

In total, Georgia assembled 12,000 officers and men before launching a large-scale military operation against Tskhinval. In all, there were three infantry brigades, an artillery brigade, a detached tank battalion and special units of the Defense Ministry and the Interior Ministry operating along roads to Tskhinval.

Russian Ambassador-at-Large Yury Popov flew to the region. He prepared the ground for a meeting in Tskhinval between Temur Yakobashvili and South Ossetian Deputy Prime Minister Boris Chochiyev. However, the meeting was not held due to the resumed shelling of Tskhinval and other towns and villages on August 7.

On August 7, Popov met with Yakobashvili in Tbilisi to discuss prospects for a tripartite meeting. Following meetings with Georgian villagers, Yakobashvili returned to Tbilisi, while Popov stayed with the Joint Peacekeeping Staff.

In the afternoon, Tskhinval and its environs were shelled from the Georgian villages of Nikozi and Ergneti.

In the evening, Yakobashvili declared that Georgia would unilaterally suspend fire in the conflict zone. In his words, Georgia wished to demonstrate to the South Ossetian authorities “the entire fatuity of armed confrontation.” Yakobashvili said that he was heading to the conflict zone to sit down at the negotiating table with Popov.

At 7:40 p.m., Georgian President Mikheil Saakashvili delivered an address to the Georgian people, stating that on Thursday evening he had ordered all armed units not to open retaliatory fire in the conflict zone. “I would like to address those who are firing at the Georgian police. I would like to say with full responsibility that several hours ago I adopted a very difficult decision not to return fire,” he stressed.

At 10:35 p.m. on August 7, three hours after his statement, Georgia began an offensive on South Ossetia.

At 11:15 p.m., armed clashes began, as did fire attacks with the use of grenade launchers and mortars. At 11:45 pm, multiple rocket launchers opened fire.

At 1:20 a.m., Georgian forces commenced redeployment in the eastern part of Tskhinval with the backdrop of artillery bombardment.

In the early hours of August 8, Gen. Mamuka Kurashvili, commander of the Peacekeeping Operations at the Joint Staff of the Georgian Defense Ministry, told Rustavi-2 TV that Georgia had decided to restore “constitutional order” in the conflict zone.

In the morning, Georgian aircraft attacked South Ossetian targets, including the village of Tkverneti and a motorcade with humanitarian aid from North Ossetia.

The same morning, Yakobashvili went on record as saying that Tskhinval was “almost encircled by Georgian units, but we don’t want destruction and loss of life and are again offering that the separatist leaders begin direct talks on a ceasefire and de-escalation in the conflict zone.”

The nighttime Georgian shelling hit a number of buildings on the premises of the Russian peacekeepers’ staff in Tskhinval. The South Ossetian parliament was in flames and the government compound was destroyed. Fires raged inside multi-story residential buildings and other structures in the city center.

A battery of Georgian tanks and some infantry units were heading toward Tskhinval.

By midday, Georgian forces, despite South Ossetian resistance, established control over Tskhinval and eight other villages.

Given the direct threat to the lives of Russian citizens in South Ossetia and in keeping with the right to self-defense, Russia ordered additional forces to South Ossetia to reinforce the Russian peacekeepers and protect civilians, which took place in the afternoon of August 8.

At 3 p.m., Russian President Dmitry Medvedev delivered a televised statement in connection with the situation in South Ossetia. He stressed that in keeping with constitution and federal law, as Russian president, he had a duty to defend the lives and dignity of Russian citizens wherever they are. Under the existing circumstances, Russia had to launch a military operation against Georgia to protect Russian citizens in South Ossetia.

On August 9, additional units from Russia’s 58th Army were deployed in the conflict zone along with paratrooper divisions.

Georgia said its troops were bombed by Russian fighters. Russian troops engaged in combat operations on the Zara road leading to Tskhinval from the north and were successful in opening it.

At 4 p.m., under a directive from the supreme commander-in-chief of the Russian Armed Forces, the Russian Navy began patrolling Abkhazia’s shoreline near the conflict zone with South Ossetia. A communique to this effect was delivered to Georgia.

Russian Ground Forces Commander-in-Chief Gen. Vladimir Boldyrev, told reporters that the Russian battalions and tactical groups had cleared Tskhinval of Georgian armed forces and were pushing Georgian troops out of the peacekeepers’ area of responsibility.

The Georgian president called an emergency meeting of the country’s Security Council to announce a decision to impose martial law across the country. “Georgia faces Russian aggression,” he said.

On August 10, Georgia’s Foreign Affairs Ministry delivered a communique to the Russian embassy saying that the Georgian president had ordered a ceasefire starting at 5 a.m. on August 10, while Georgian armed forces were to leave the conflict zone.

In an interview with CNN, Saakashvili said that all Georgian troops had left the conflict zone.

Russian ships patrolling the shoreline of the unrecognized Republic of Abkhazia came under attack from four Georgian ships, one of which was sunk. After firing warning shots the Russian ships used a barrage of artillery fire.

On August 11, Medvedev said at a meeting with Defense Minister Anatoly Serdyukov that Russia’s operation in South Ossetia was to a large extent complete, and that peacekeepers had taken control of Tskhinval.

Russian peacekeepers and armed forces carried out preventive moves near the Georgian city of Senaki, where a Georgian military base is located, to prevent any further aggression against South Ossetia.

According to a statement by a Russian Defense Ministry spokesman, two companies of East and West battalions were deployed in South Ossetia from Chechnya.

At 1 p.m., the Russian Defense Ministry said that troops would not advance further into Georgia.

Russia and France agreed to a six-point settlement plan for Georgia, known as the Medvedev-Sarkozy Plan, stating the need to renounce the use of force, ensure the definitive cessation of all hostilities with free access to humanitarian aid, and requiring Georgian troops to return to their bases. Russian armed forces were to pull back to their positions they were located at before the beginning of hostilities, while implementing additional security measures until international mechanisms were put in place. The sixth principle was on the start of international discussions on the future status of South Ossetia and Abkhazia and ensuring their security.

Georgian authorities agreed to sign the document, but insisted that references to the statuses of the want-away regions be removed, proposing to focus on security arrangements.

On August 14, leaders of the unrecognized republics of Abkhazia and South Ossetia signed the settlement plan.

On August 17, the unrecognized republic of South Ossetia declared a state of emergency for one year along with a curfew in Tskhinval from 9 p.m. to 6 a.m.

On August 20, from 9 p.m., South Ossetia lifted the state of emergency across the republic and the curfew in Tskhinval “due to the stabilization of the situation in South Ossetia.”

On August 21, Abkhazia and South Ossetia held “national town hall meetings,” which resulted in the presidents and parliaments of the two republics asking Russia to recognize the independence of the self-proclaimed states.

On August 22, at 7:50 p.m., Russia completed the withdrawal of its troops from Georgia and those that assisted the peacekeeping forces during the operation.

According to the authorities of South Ossetia, the attack by the Georgian Army resulted in the death of 1,500 people, while the Russian Investigative Committee documented only 162 casualties among the residents of South Ossetia.

The number of Russian service personnel killed during the conflict totaled 67, the Russian Investigative Committee said in a statement.