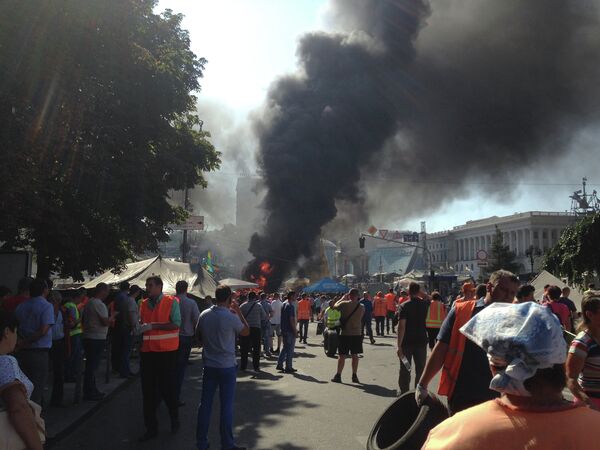 Clashes among activists and police broke out Thursday on central Kiev's Maidan Square, the flashpoint of the country’s pro-EU uprising in November 2013.

KIEV, August 7 (RIA Novosti) – Clashes among activists and police broke out Thursday on central Kiev's Maidan Square, the flashpoint of the country’s pro-EU uprising in November 2013.

Activists were seen throwing stones and sticks at police and firemen in a bid to force them out of the square.

A RIA Novosti correspondent said that tires were set ablaze, with sounds of what appeared to be an explosion heard in downtown Kiev. Thick smoke has blanketed the square, where a protest camp was set up less than a year ago.

“The entire square is covered in thick smoke. The [two] fires appeared on Maidan just as community service workers began taking down the barricades,” the correspondent said, adding that a large crowd had assembled in Kiev’s main square.

Earlier in the day, police seized some 20 boxes with petrol bombs as utility workers continued to dismantle the barricades in the center of Kiev.

Protesters occupied Maidan Nezalezhnosti, or Independence Square, on November 21, 2013, after Ukraine's Cabinet of Ministers announced an about-turn in the signing of a European Union association agreement.

The so-called Maidan protests then spread across the country, resulting in violent armed clashes between radicals and the police, leading to about 100 deaths. Even after Ukraine underwent a regime change in February, a number of protesters remained on the square with while others relocated to the nearby Mikhailovskaya Square.

Ukrainian authorities have repeatedly called on the activists to leave Maidan and free occupied buildings but they have refused to do so.