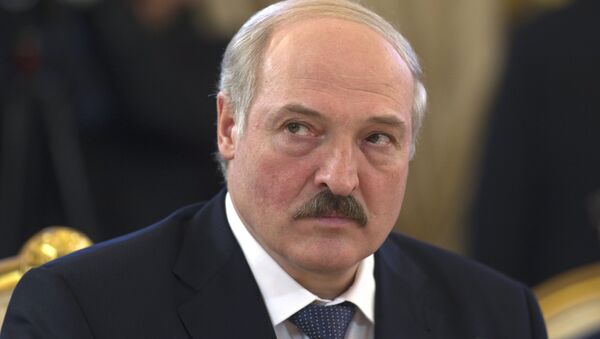 © Sputnik
Subscribe
Belarusian President Alexander Lukashenko on Thursday pledged to ensure complete transparency on the Russian-Belarusian border in light of the Russian ban on food imports from sanction nations, his press service said.

Lukashenko and Russian President Vladimir Putin discussed over the phone Russia’s one-year embargo on food imports from the European Union, the United States and some other countries, as well as bilateral cooperation in the framework of the Eurasian Economic Union (EAU).

“The Belarusian president stressed that Belarus will ensure full transparency on the border in the spirit of [Russia-Belarus] partnership,” Lukashenko’s press service said in a statement.

Russia’s Agriculture Ministry has already stated that Moscow would find ways to prevent attempts to violate the food embargo using Russia’s partners in the framework of the Customs Union.

Belarus is one of the founding members of the EAU economic union. Minsk earlier pledged to widen the range of its exports to Russia by including noodles, vegetables, groceries, confectionary products, meat and dairy products.

On Wednesday, Russian President Vladimir Putin signed an order on economic measures to protect the country's security. The decree banned for a year imports of agricultural and food products from several countries that have imposed sanctions on Russia over the Ukrainian crisis.

The complete “blacklist” of food imports from Australia, Canada, the European Union, the United States and Norway was announced Thursday. The list includes meat, poultry, fish, seafood, milk, dairy products, as well as fruits and vegetables. The embargo does not include infant foods and products.

Russian Prime Minister Dmitry Medvedev instructed the Federal Customs Service to see that the banned imports could not cross the Russian border.