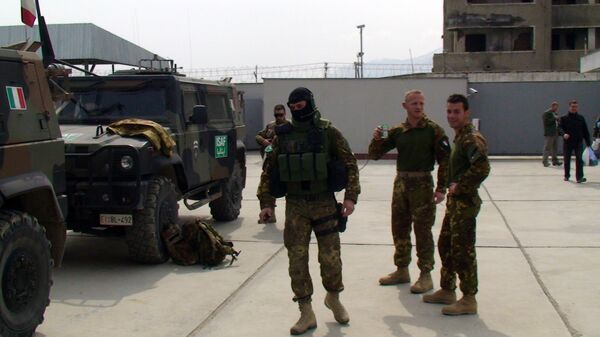 The International Security Assistance Force (ISAF) in Afghanistan has suspended its cooperation with the Afghan National Army (ANA) at various military facilities after the killing of a US major general, Der Spiegel reported Thursday.

MOSCOW, August 7 (RIA Novosti) - The International Security Assistance Force (ISAF) in Afghanistan has suspended its cooperation with the Afghan National Army (ANA) at various military facilities after the killing of a US major general, Der Spiegel reported Thursday.

ISAF commander Joseph Dunford suspended the Afghan military support mission by ordering on Tuesday all international instructors and military consultants to remain in their camps until Friday, while the incident is being investigated, according to the German magazine.

The decision followed the shooting of US Maj. Gen. Harold Greene in an attack at an officers' academy in Kabul.

Brig. Gen. Michael Bartscher of Germany, 12 NATO soldiers and several Afghan troops were injured in the attack, which the Taliban claimed responsibility for.

Germany’s Defense Ministry identified the shooter as an Afghan citizen named Rafiqullah, who had served in the Army for two years. The shooter was allegedly hiding in a building on the camp's territory waiting for a group of officers to show up and opened fire at them. He was killed by bodyguards.

The motives behind the attack are being investigated. The magazine said that the possibility of such incidents occurring in the future has not been excluded.

The incident follows a series of "insider attacks" against NATO forces by members of Afghanistan’s security forces or insurgents disguised in Afghan uniforms, and marks the highest-ranking US fatality in the international military campaign against the Taliban in the war-torn country.

The so-called "green-on-blue attacks" spiked in 2012, when foreign troops started working closer with Afghan forces to train them ahead of the expected withdrawal of the US combat troops at the end of 2014. The attacks prompted ISAF to introduce strict security measures.

The ISAF, a NATO-led mission aimed at training Afghan security forces, has been active in Afghanistan since late 2001.