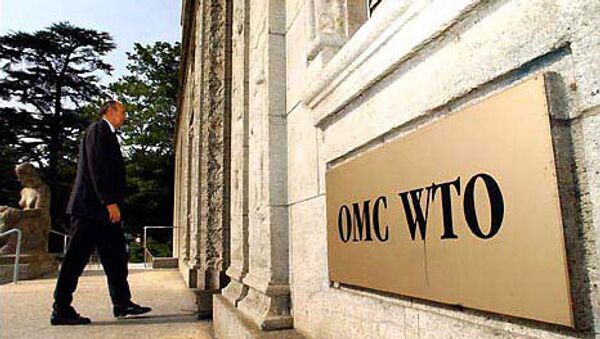 © news07.join.com.ua
Subscribe
The European Union will most likely examine the possibility of turning to the World Trade Organization in regard to Russia’s banning the import of food products from the EU, Lithuanian Foreign Minister Linas Linkevičius told RIA Novosti on Thursday.

BRUSSELS, August 7 (RIA Novosti) — The European Union will most likely examine the possibility of turning to the World Trade Organization in regard to Russia’s banning the import of food products from the EU, Lithuanian Foreign Minister Linas Linkevičius told RIA Novosti on Thursday.

"We will hold consultations with our partners. The interests of EU member states in the WTO are protected by the European Commission and this is done in coordination. So I think that these issues will also be discussed, but it’s too early to speak of consequences. There will be [consequences], but what kind will have to be thoroughly examined and then make conclusions," Linkevičius said.

On Wednesday, Russian President Vladimir Putin singed an order on economic measures to protect the country's security. The decree banned for a year imports of agricultural and food products from countries that have imposed sanctions on Russia.

The list of the banned agricultural products includes meat, poultry and milk products as well as fruits and vegetables from the United States, the European Union, Canada, Australia and Norway.

The embargo does not include infant foods and goods.

The Russian restrictions came as a response to the latest Western sanctions on the country's economic, defense and energy sectors, as well as dozens of individuals.

At the height of the Ukrainian crisis, the United States imposed several rounds of sanctions against Russian officials, business people and companies and pressed for the allies in the West to follow its lead. The European Union, Switzerland, Canada, Australia and Japan soon caved in to the US sanctions push and drew up their own blacklists.