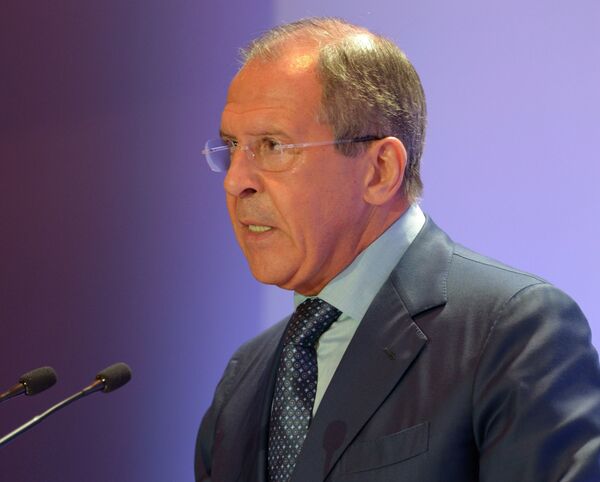 © RIA Novosti . Eduard Pesov
/
Go to the photo bank
Subscribe
Russian Foreign Minister Sergei Lavrov said Wednesday the International Committee of the Red Cross should determine the details of its humanitarian assistance to war-torn southeastern Ukraine as quickly as possible.

"In order to alleviate the suffering of those who currently have no chance of fleeing to other regions of Ukraine or abroad, we asked the International Committee of the Red Cross to become the aegis for humanitarian convoys, intended mainly for the Donetsk and Luhansk regions and carrying power generators, water purifiers, medical equipment, medicines, food," the Russian foreign minister told reporters during his visit to the Kazakh city of Ust-Kamenogorsk.

"The leadership of the International Committee of the Red Cross supported this approach and I hope will promptly decide on practical aspects of implementing this initiative," he said.

Lavrov also stressed that to put forward this initiative, no resolution by the UN Security Council or any other international bodies is needed. The move is aimed at raising the awareness of the international community of the current situation in southeastern Ukraine.

On Tuesday, Russia called for an emergency UN Security Council session on the humanitarian situation in eastern Ukraine, which has been embroiled in Kiev’s military crackdown on independence supporters.

Russian Ambassador to the UN Vitaly Churkin said Moscow is seeking full transparency and suggested sending humanitarian convoys to eastern Ukraine under the auspice of and accompanied by the International Committee of the Red Cross.

At the same meeting, UN humanitarian official John Ging said that at least 1,367 people have been killed by fighting in eastern Ukraine since mid-April, and the humanitarian situation in the region is deteriorating.