MH17 Brought Down by Air-to-Air Missile, Finished Off by 30-mm Cannon, Experts Allege 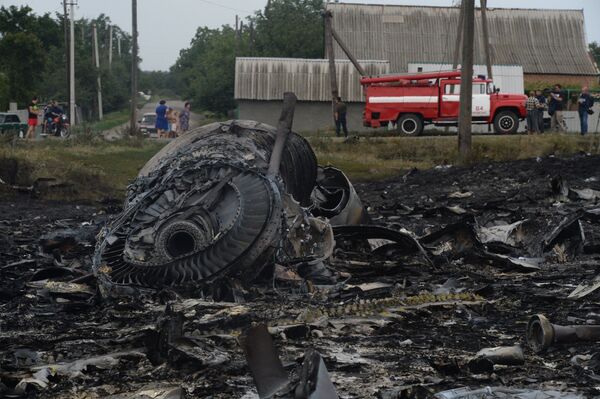 The Malaysian Boeing plane that crashed in eastern Ukraine in mid-July, could have been brought down by an air-to-air missile and a cannon of the Su-25 fighter that had been “shadowing it,” The New Straits Times reported on Wednesday citing experts.

MOSCOW, August 6 (RIA Novosti) – The Malaysian Boeing plane that crashed in eastern Ukraine in mid-July, could have been brought down by an air-to-air missile and a cannon of the Su-25 fighter that had been “shadowing it,” The New Straits Times reported on Wednesday citing experts.

Experts believe that MH17 flight was shot down by an air-to-air missile fired from the fighter that later finished it off with a burst of 30mm cannon fire, the newspaper has reported.

According to the experts, if this hypothesis is true, it would explain the bullet holes in some sections of MH17’s fuselage.

“Some showed blast patterns consistent with shrapnel from a proximity-fused weapon while some showed the more precise grouping consistent with that of cannon fire. We’re analyzing this,” said one of the sources, adding that a detailed analysis of the pieces of the jetliner is needed to corroborate this emerging theory.

Under this new version, the heat-seeker would have aimed at the hottest part of the aircraft's engines. These claims rule out the previous version that the aircraft had been downed by the BUK missile system (NATO SA-11 'Gadfly').

“A BUK-M1, with its 70 kg head, would have been enough bring down the airliner without the need to go in for a guns kill,” the sources said.

The Sukhoi Su-25 close-air support aircraft (NATO Frogfoot) has a maximum service ceiling of about 25,000 feet (7,620 meters). It has an internally mounted 30mm cannon for anti-armor work, the report said.

“The Su-25 would have been operating at the extreme corner of its performance envelope but it’s entirely possible,” the sources added.

Five days after the deadly crash, the Russian Defense Ministry said that the “shadowing” the MH17 was a Russian-manufactured Sukhoi Su-25 close-air support aircraft operated by the Ukrainian Air Force.

The presence of the Ukrainian combat jet can be confirmed by video shots made by the Rostov monitoring center, said Lt. Gen. Andrei Kartapolov, the head of the Main Operations Directorate of the HQ of Russia’s military forces.

The ministry’ s analysis of MH17 showed that the Russian air traffic control system picked up a deviation in the flight path of 14 kilometers north from the fixed corridor, well inside Ukrainian airspace, while following its assigned flight level of 33,000 feet.

This deviation in the flight path could have been performed only under the instruction of Ukraine’s air traffic controllers. Russian radar nets also picked up “activity” by the Ukrainian Air Force in the area at the time MH17 was airborne.

The air-to-ground transmission tapes between MH17 and Ukrainian air traffic controllers were seized by the Ukrainian Security Service on the day of the shootdown and have not been made available to investigators.

Media reports said earlier that the information provided by the black boxes from the Boeing plane, which have not been so far unveiled to public, said that the aircraft was damaged by multiple fragments of a missile.