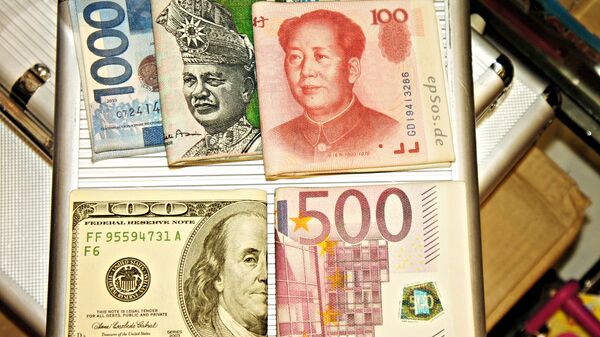 © Flickr / epSos .de
Subscribe
International
India
Africa
The world could plunge into a new Cold War with Russia and China emerging as a new financial centers, unless the West changes the existing financial structures, a professor at University of California, Davis Wing Thye Woo said Wednesday at the discussion at the Johns Hopkins School of Advanced International Studies.

WASHINGTON, August 7 (RIA Novosti) - The world could plunge into a new Cold War with Russia and China emerging as a new financial centers, unless the West changes the existing financial structures, a professor at University of California, Davis Wing Thye Woo said Wednesday at the discussion at the Johns Hopkins School of Advanced International Studies.

“I think that if changes do not occur in the international [financial] institutions of today, I think that we are basically encouraging a China-Russian alliance to formulate an alternative center to the US,” Woo said.

Speaking of the BRICS bank, which is meant to be an alternative to western-dominated international institutions, Woo continued, “If it turns out to be the first sort of challenge to the regular, existing order, then we are plunging right into a second Cold War where you have different competing centers who fight different final objectives.”

“Right now if you look at China, it is surrounded by US allies. So talking about a sense of vulnerability - if that is not addressed, I think the economics and the politics will push us all in the same direction of a divided global order,” Woo said answering the question on the perspectives of the BRICS alliance and closer ties forged between Russia and China.

China is continuing to experience rapid economic growth and aspires to have its currency, the Renminbi (RMB), used as an international currency to settle international trade. In the past, Western dominated international financial institutions have been reluctant to change policies and practices to accommodate the rapid growth of competitor nations as well as developing nations.

While discussing the possibility of Shanghai becoming a third major financial center, on par with London and New York, Professor Woo addressed the objective factors in China’s economy that could hinder that outcome as well as the geopolitical considerations that could intervene.

“If a new Cold War were to break out, that would certainly undermine China’s effort to promote the RMB as an international currency and promote Shanghai as an international financial center,” Woo said, adding that the highest cost would be the loss of economic growth and a halt to the diffusion of technological knowledge to the country.

However, the expert was not convinced that the emergence of competing centers of power in the East and West was inevitable. Comparing it to the onset of World War I, Woo noted that such a conflict would occur essentially by accident, or through proxies of the larger nations involved.

“I do not think the US is really in the mood to go into a full-fledged confrontation in China after the current withdrawal from Afghanistan and Iraq is complete. The US does not have the money to do it either, especially since the Eastern European front is not cooling down,” Woo said. “What is happening in Ukraine, if combined with increased tensions in East Asia could be the unfortunate push into the Cold War for us.”