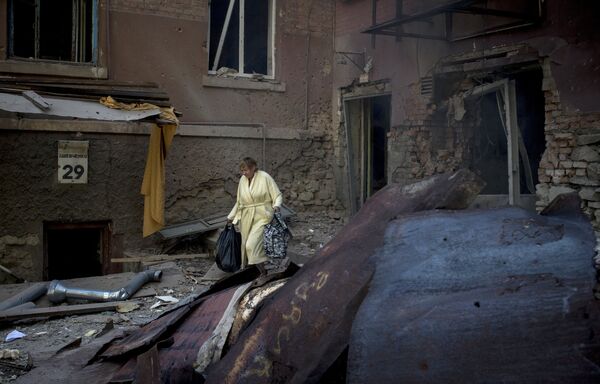 Ukraine’s eastern city of Luhansk is facing an environmental catastrophe, as Kiev's ongoing military operation has halted waste removal from the city and water disinfection, the local authorities reported Tuesday.

“Most of the Luhansk Center for Waste Disposal’s vehicles have been damaged … so waste transport has completely stopped and the city is on the brink of an ecological disaster,” the city council reported.

Luhansk is still cut off from electricity. Damaged infrastructure cannot be fixed, because ongoing fighting has made deliveries of essential equipment impossible. Some Luhansk residents have no access to power, water, fixed or mobile telephony or the Internet.

Chlorine deliveries to water treatment plants have also been halted. Since July 26, the city has been receiving drinking water that has not been properly disinfected. There is also a shortage of medical supplies, and four city hospitals and three clinics have been partially destroyed.

A week ago, Luhansk People’s Republic (LPR) Prime Minister Marat Bashirov said Luhansk was facing a humanitarian crisis. The pro-Kiev forces destroyed Luhansk substations serving the local food industry so the supplies could no longer be stored. Bashirov added that the city of Luhansk is expected to run out of drinking water in several days.

Kiev has been conducting a military operation in eastern Ukraine since April against those unhappy with the February political coup. According to data obtained by the UN and the World Health Organization, 1,129 civilians were killed and 3,442 injured between mid-April and July 26.