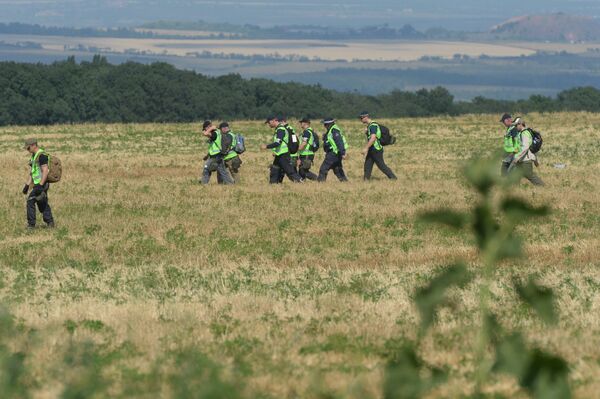 © RIA Novosti . Mikhail Voskresensky
/
Go to the photo bank
Subscribe
A group of 10 American military has arrived in Ukraine to investigate into the crash of a Malaysian Boeing 777, which was downed in the country’s east in July, Reuters reported, adding that the team would not visit the crash site.

MOSCOW, August 6 (RIA Novosti) - A group of 10 American military has arrived in Ukraine to investigate into the crash of a Malaysian Boeing 777, which was downed in the country’s east in July, Reuters reported, adding that the team would not visit the crash site.

“The team would work in coordination with and support the FBI team already on the ground," US European Command spokesman US Navy Captain Gregory Hicks was quoted as saying. “They will not participate in actual recovery operations. The team will be in Kiev for as long as required in support of the overall US contribution to the investigation.”

The group including special operations, logistics, communications and air planning personnel, will be working in Kiev, as the ongoing fighting between the self-defense forces and the Ukrainian Army make it risky to visit the crash site.

Hicks added that the survey and assessment team would advise the US Embassy in Kiev over possible American support to the Netherlands, Malaysia and Australia in the MH17 investigation and recovery.

Following the deadly crash, the United States and the European Union imposed new sanctions against Russia, which they claimed could be responsible for the tragedy.

According to authorities in Kiev, as well as the West, the plane was shot down by weapons supposedly “delivered” to independence supporters by Russia.

Last week, Pentagon spokesman Rear Admiral John Kirby announced that the United States was planning to spend $19 million in 2015 on training and equipment of the Ukrainian National Guard “as part of their efforts to build their capacity for internal defense."