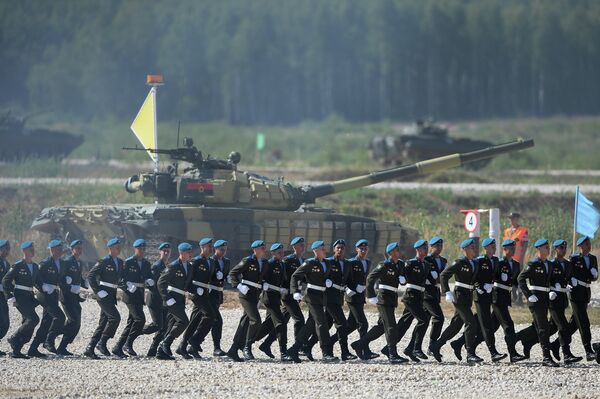 “I’m listing countries in order of time [showed]. The Russian Federation showed a time of 25 minutes and 39 seconds,” Petrov said.

Russia was followed by the Armenian team which completed the course in 28 minutes and 58 seconds. Kazakhstan was third with a time of 29 minutes and 53 seconds.

Only the Russian, Armenian and Chinese teams finished the round complying with all the rules and without serving penalty time, Petrov added.

The first tank biathlon championship started in Alabino, a town southwest of Moscow, on Monday and will run through August 16.

Teams from 12 countries, including from Russia, Angola, Armenia, Belarus, Venezuela, India, Kazakhstan, Kyrgyzstan, are participating in the competition. Delegations from more than 20 countries took part as observers.

A tank biathlon is a mechanized military sport invented by the Russian military that has similarities to the sport of biathlon. Tanks have to complete a course of up to 20 kilometers (12.5 miles) avoiding obstacles, crossing rivers and bridges and firing at a set of targets positioned at distances from 900 to 2,200 meters (2,900 to 7,200 feet).