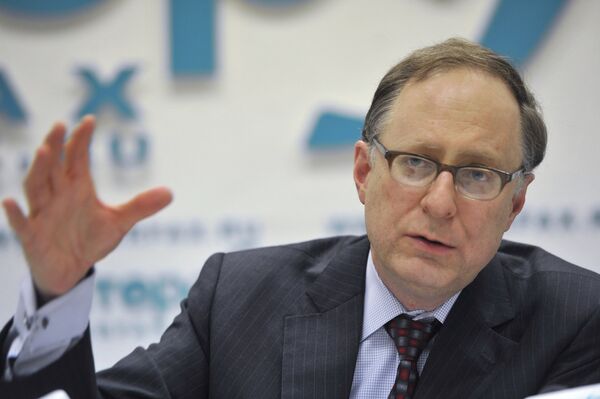 NATO Deputy Secretary-General Alexander Vershbow said Tuesday Russia had beefed up its troops along its border with Ukraine by some 20,000 soldiers.

BRUSSELS, August 5 (RIA Novosti) – NATO Deputy Secretary-General Alexander Vershbow said Tuesday Russia had beefed up its troops along its border with Ukraine by some 20,000 soldiers.

NATO has never looked for pretext to stir tensions with Russia, the deputy secretary-general added in another message.

On Monday, the Russian Foreign Ministry said that NATO revived its propaganda against Moscow in order “to justify the alleged need to 'rally its ranks' in the face of an imaginary external threat to NATO, to increase military expenditure and to boost the demand for the alliance in the 21st century." The ministry also sharply criticized NATO Secretary-General Anders Fogh Rasmussen for his ungrounded confrontational rhetoric against Russia that resembles ‘Cold War’ propaganda clichés.

In a Sunday interview with French newspaper Midi Libre, Rasmussen said the alliance would draw up new defense plans in the face of alleged "Russia's aggression" against Ukraine, and again encouraged NATO countries to increase their defense spending.

The West has repeatedly accused Russia of building up its forces on its border with eastern Ukraine and supplying Ukrainian independence supporters with weapons. The West has failed to provide any proof so far.

Moscow has rejected these claims. The Russian Defense Ministry said on July 27 that in the past four months 18 international inspection teams visited the areas in Russia bordering Ukraine under the Vienna Document of 2011 and the Treaty on Open Skies and found “no violations or undeclared military activity.” Russian President Vladimir Putin said that before accusing Russia one has to show real evidence.