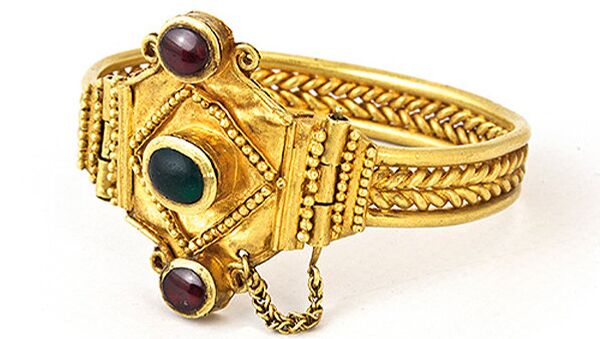 © Photo : Allard Pierson Museum
Subscribe
The return of Scythian gold to Crimea from the Netherlands is a matter of cooperation between museums, Russian Culture Minister Vladimir Medinsky said on Monday.

MOSCOW, August 4 (RIA Novosti) — The return of Scythian gold to Crimea from the Netherlands is a matter of cooperation between museums, Russian Culture Minister Vladimir Medinsky said on Monday.

“The issue of the Scythian gold return is an inter-museum matter of purely legal nature. It is a regular legal issue between the museums of Crimea and the Netherlands. I do not know what should happen for politics to get involved in, as I see, an entirely legal issue,” Medinsky said, dismissing the allegations that the Malaysia Airlines plane crash could influence the case.

The Ukrainian Culture Ministry said that the items in the collection would be returned to Kiev, since they are considered Ukrainian property. The Netherlands did not confirm this information, saying that the issue should be resolved by the museums, involved in the matter.

A collection of rare gold artifacts was sent to the Netherlands in February for an exhibition. The collection is displayed in an exhibition entitled “Crimea: Gold and Secrets of the Black Sea” that showcases artifacts from five Ukrainian museums, four of which are located in Crimea.

In March, the Ukrainian government demanded the gold back to itself, not Crimea, in light of the latter reunifying with Russia. Crimea, however, dismissed these claims as groundless.