Russian Journalists Come Under Fire at Checkpoint in Rostov Region 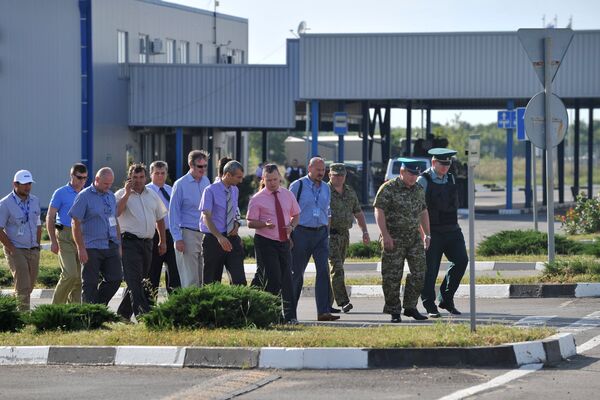 Journalists of the Russian television channel Zvezda have come under fire at Gukovo checkpoint in Rostov Region on the border with Ukraine, the TV channel reported Sunday.

MOSCOW, August 3 (RIA Novosti) – Journalists of the Russian television channel Zvezda have come under fire at Gukovo checkpoint in Rostov Region on the border with Ukraine, the TV channel reported Sunday.

“At around 5:30 p.m. [13:30 GMT] we heard a powerful explosion and clearly saw a flash in the sky and fragments flying over all around. This occurred some 20 meters from us,” the TV channel quoted its correspondent Vasily Kuchushev as saying.

Earlier on Sunday, a mine round launched from Ukraine’s territory exploded near Gukovo checkpoint.

No one among Russian troops and also members of the OSCE mission have been injured.

An OSCE team started round-the-clock monitoring of Russia’s Gukovo and Donetsk crossing points on the border with Ukraine on July 30.

Russia invited OSCE monitors in the beginning of July to assess the situation on the Russian-Ukrainian border, which has been hit multiple times by Ukrainian artillery. On July 13, shells exploded in the Russian city of Donetsk in Rostov Region, killing one civilian and injuring two more.

Russia’s Rostov Region borders Ukraine’s eastern regions, the scene of fighting between the Ukrainian Army and independence forces refusing to recognize the legitimacy of the new government. Hundreds of people, including civilians have died in both regions over the past few months.

On July 30, Rostov’s regional government reported that since the military operation in southeastern Ukraine started, one person has been killed and nine injured on the Russian territory as a result of Ukrainian shelling.

Moscow condemned the attacks, saying that such provocations may have irreversible consequences.