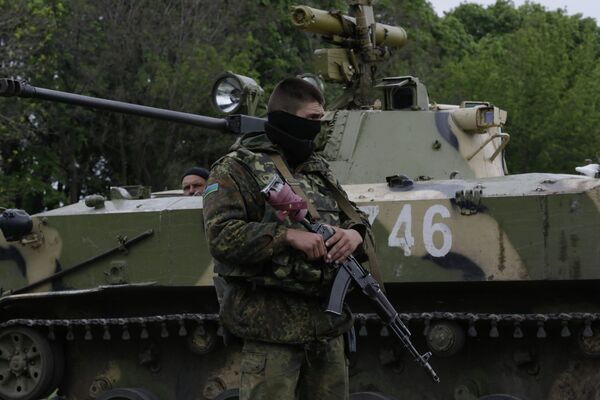 © RIA Novosti . Maks Vetrov
/
Go to the photo bank
Subscribe
A group of 12 Ukrainian troops has reached the Gukovo checkpoint in Russia’s Rostov Region and requested asylum in Russia, the Rossiya-24 TV channel reported on Sunday.

“Twelve servicemen of the 72th motorized brigade of Ukraine’s Armed Forces, including officers and soldiers, have crossed over to Russia’s territory,” said Malayev.

The Ukrainian troops said they had no more food and money and ammunition that they had been given could not be used for their weapons systems, according to Malayev.

The Rossiya-24 TV channel reported earlier on Sunday that servicemen, both officers and soldiers from the 72th motorized brigade, went through the neutral zone of the Russian-Ukrainian border carrying a white flag and no weapons on them.

One of the Ukrainian officers told the TV channel: «Absolutely, we are not traitors. We are in no war with Russia. There can be some 'misunderstanding,' but there is no war. To save the lives of my subordinates, a decision has been taken to move them out via Russia."

Earlier reports said more than 40 Ukrainian servicemen have abandoned their military units and asked independence supporters to allow them to come to Russia in order not to fight against their own people.

In mid-April, Kiev launched a military crackdown on independence supporters in eastern Ukraine. According to the latest UN report, the conflict has claimed the lives of 1,129 civilians since then, with another 3,442 injured.

Moscow has repeatedly condemned Kiev’s «war against own people» and urged an immediate stop to the punitive operation, advocating for a peaceful resolution to the crisis.