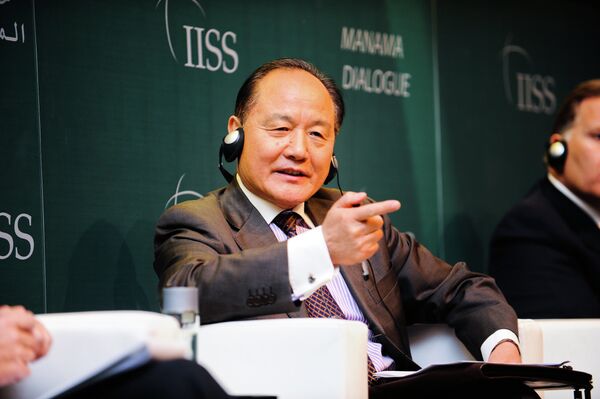 © Flickr / The International Institute for Strategic Studies
Subscribe
About one hundred civilians were murdered and injured during an armed clash in China's Xinjiang Uyghur Autonomous Region on Monday, July, 29. Chinese officials have already qualified it as a "terrorist attack."

About one hundred civilians were murdered and injured during an armed clash in China's Xinjiang Uyghur Autonomous Region on Monday, July, 29. Chinese officials have already qualified it as a "terrorist attack." The tragedy in Shache County has become one more violent skirmish in a long string of attacks allegedly carried out by radical Uyghur Muslim separatists. Wu Sike, China's special envoy for the Middle East, emphasizes that the notorious Xinjiang extremist groups have strong ties to al-Qaeda linked militants in Syria and Iraq.

Xinjiang, an "autonomous region" in the northwest of China, is the largest state's oil and natural gas producing area and a transit zone for major oil and gas pipelines. Uyghurs, a Turkic ethnic group practicing Sufi Islam, constitute the majority of Xinjiang's population. Ethnic clashes between Uyghurs and Han Chinese people occurred sporadically over the decades, but they have grown extremely tense in the recent years and gained new specific features. The cases of violence became better organized and evidently premeditated. In addition, experts point to the "shift of target" of Xinjiang radicals' attacks.

"What's new, and what I think is significant, is that we have a shift in target," noted James Leibold, an expert in ethnic relations in China at La Trobe University in Melbourne, quoted by the CNN. "We have a targeting of innocent civilians, places where innocent civilians gather – an attempt to maim innocent civilians in large numbers. The other change is that the violence has "seeped outside" the borders of Xinjiang into other parts of China," he added.

Although it still remains unclear what particular extremist group was behind the string of attacks which plunged the region into havoc, the Chinese leadership is inclined to consider the East Turkestan Islamic Movement (ETIM) responsible for the assaults. The ETIM was founded in late 1990s by Hasan Mahsum, a Uyghur from Xinjiang's Kashgar region. According to the UN al-Qaeda/Taliban Sanctions Committee list, ETIM is an organization which uses violence in order of setting up an independent state, so-called "East Turkistan," within China. "Since its establishment, ETIM has maintained close ties with the Taliban, al-Qaeda and the Islamic Movement of Uzbekistan."

It should be noted that the Chinese government repeatedly warned Washington that the ETIM had deep ties to al-Qaeda and its infamous former leader bin Laden. Eventually, the White House announced in 2002 that it would freeze the ETIM's assets. Interestingly enough, the US leadership has not yet added the East Turkestan Islamic Movement to the State Department's Foreign Terrorist Organizations main list.

Experts admit that the ETIM's burst of activity in the recent years coincided with the launch of Sino-Pakistan "trade and energy corridor" project which would link Xinjiang's city of Kashgar to the Pakistani Gwadar, the potential gateway to pivot economic regions of Central Asia and Middle East.

"Conveniently for Washington, which has no interest in fostering greater Chinese independence of energy supply, <…> a growing militant separatist movement has erupted on the scene in Baluchistan, the Pakistan province where Gwadar is located," wrote William Engdahl, a writer and an award-winning geopolitical analyst, in his Op-Ed "Pakistan to become the new 'major terror ground' in just six months." The analyst noted that Uyghur extremists' activity drastically increased at the same period of time in Xinjiang, "the end-point of the new Gwadar to China rail and road infrastructure "land bridge."

The writer pointed out that Muslim Uyghur youths are being recruited by the ETIM and then sent to Syria's al-Qaeda linked militant groups as jihadists. Those who survived the bloodbath return to Xinjiang.

According to Wu Sike, China’s special envoy for the Middle East, Syria and Iraq have become a "training ground" for radical Uyghurs. When they return home, he stresses, they will pose a severe challenge and security risk to the country. "China is a victim of extremist, terrorist activities," Wu Sike said, cited by Reuters, "and our support for fighting terrorism in this region is beneficial to us too."

While participating in global BRICS programs and increasing its energy independence, China faces a foe, determined to undermine its security and economic stability. The question remains open: who is behind murky Xinjiang Islamist movement's terror actions?