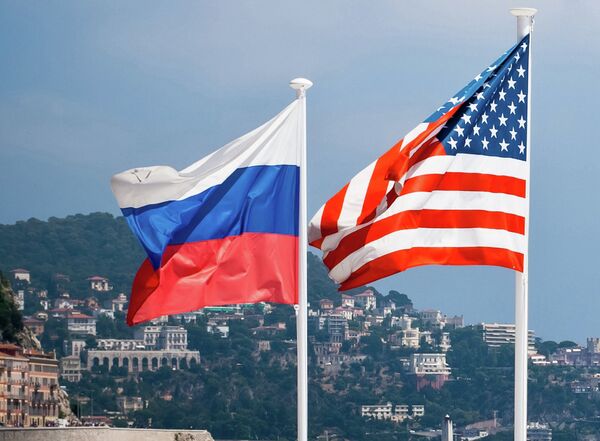 The confrontation between Moscow and Washington over the Ukrainian internal strife will doubtlessly shift the global balance of power, believes Dmitri Trenin, a well-known Russian political scientist, author, and the Director of the Carnegie Moscow Center.

The confrontation between Moscow and Washington over the Ukrainian internal strife will doubtlessly shift the global balance of power, believes Dmitri Trenin, a well-known Russian political scientist, author, and the Director of the Carnegie Moscow Center.

"The current US-Russia struggle is about a new international order," and Ukraine is the "main battleground" where the two global players are setting new rules and conditions, writes Dmitri Trenin in his article "Europe's Nightmare Coming True: America vs. Russia…Again," published in the National Interest, a reputable American media outlet.

However, it's not Ukraine but Europe as a whole has become the central pivot of geopolitical competition, stresses the expert. "The stakes could not be any high," he adds.

Trenin envisions further aggravation of Russia-EU relations, deliberately instigated by Washington, in a short-term perspective. This tendency, however, may change in the long run: "Moscow may hope that the US-led punishment of Russia, coming as it does mainly at the expense of the EU's trade with it, can lead to Transatlantic and intra-EU divisions," writes Dmitri Trenin.

In contrast with the beginning of the first Cold War, when the USSR was contemplated as an ardent opponent of the West, Europeans consider Moscow neither an ideological rival nor a potential threat today. Being involved in trade relations with Russia and dependent on its energy supply, European countries are inclined to see Russia as a partner, not as an antagonist.

Thus, "Moscow will focus on Germany, Italy, France, Spain and a number of smaller countries – from Finland to Austria to Greece – with which Russia has built extensive trading relations," notes the expert. It should be noted that the European states, mentioned by Trenin, have already come under fierce criticism from the American neoconservative policy-makers. For instance, neocons urge Spain to suspend its maritime cooperation with Russia; call France to cancel its Mistral warship deal with Moscow; blame Germany and Italy for their unwillingness to put at risk strong economic ties with Russia.

Dmitri Trenin points out the two main Russia's foreign policy strategic vectors: Moscow is strengthening alliances with Germany in the West and China in the East. Although Russo-German relations are restrained by Berlin's membership in NATO, Moscow considers the EU "flagship" its long-standing geopolitical ally in Europe. In order to prevent Russian-German "dangerous" rapprochement Washington urges Berlin to tighten its sanctions policy against Moscow, and closely monitors German political elite's activity.

Although western experts, including the Director of the Carnegie Moscow Center, believe that Russia harbors a deep-seated fear of its powerful Eastern neighbor – China – Moscow has already demonstrated its readiness to expand bilateral economic and political cooperation with Beijing. It should be noted that the rapprochement between China and Russia began in early 1990s.

Thus, shifting to the East should not be qualified as Moscow's "gesture of despair" caused by the western sanctions: the US's unfriendly move has only catalyzed this process. Washington is deeply concerned about the strengthening of Sino-Russian alliance. Western experts warn that Sino-Russian bloc along with BRICS will ultimately change the global balance of power.

"Given the fundamental nature of Russia's conflict with the United States, Moscow is seeking to cement its connections with non-Western countries. The BRICS group, which brings together Brazil, Russia, India, China and South Africa, is a natural platform for that," writes Dmitri Trenin and adds, "Politically, Russia already posits itself as a go-to country for all those unhappy with US global dominance."

"It is too early to speculate how the contest might end. The stakes are very high," notes the expert. Any accidental error or serious concession made by Moscow or Washington may lead to the loss of power and global prestige by one of the competitors.

Meanwhile Russia is getting ready for reindustrialization in order to reduce its dependence on the West and increases the government control over its domestic affairs. "To a degree, the Western pressure aids the Kremlin's efforts," Dmitri Trenin emphasizes.