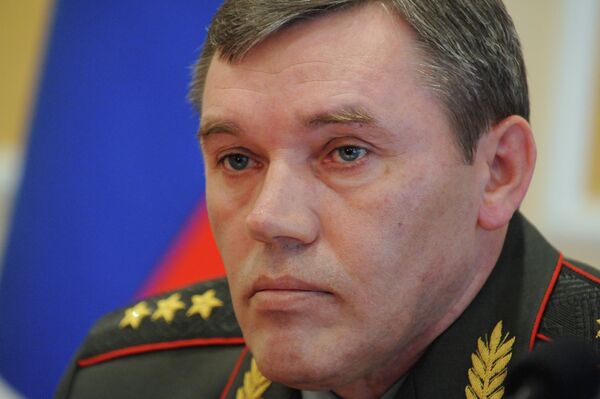 Gerasimov discussed the situation around the Soviet-era agreement in a phone call with US Chairman of the Joint Chiefs of Staff, Gen. Martin Dempsey.

“Gerasimov reaffirmed Russia’s adherence to strict implementation of the INF Treaty,” the Defense Ministry said in a statement.

Washington has recently accused Moscow of violating its obligations under the treaty, but declined to provide any evidence.

But now White House spokesman Josh Earnest said the United States has determined that Russia has violated provisions of the INF treaty.

On Wednesday, the US administration released a report claiming that Russia “is in violation of its obligations under the INF Treaty not to possess, produce, or flight-test a ground-launched cruise missile (GLCM) with a range capability of 500 km to 5,500 km, or to possess or produce launchers of such missiles.”

Josh Earnest said earlier US President Barack Obama conveyed his findings to Russian President Vladimir Putin in a letter, in addition to US previous attempts to raise the concern “with the Russians on a number of occasions through our standard diplomatic channels."

The accusation prompted the Russian Foreign Ministry to dismiss the White House statement as “ungrounded,” citing the absence of evidence to support this claim. It also bashed Washington for its plan to deploy MK 41 VLS launching systems in Poland and Romania as part of the “phased adaptive approach” for missile defense.

The INF is a 1987 agreement between the United States and the Soviet Union to eliminate the use of nuclear and conventional missiles with intermediate range, defined as 500 to 5,000 kilometers (310 to 3,100 miles).

The pact has often been lauded as an example of successful arms control because it eliminated an entire class of nuclear weapons.