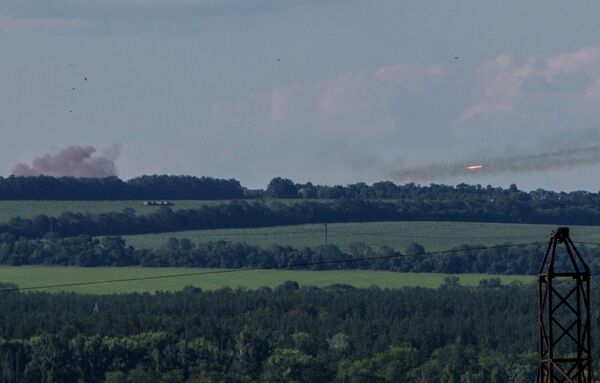 “Six Grad rockets were fired into the center of the city. They targeted our headquarter, but hit residential buildings,” a representative said.

According to the local residents’ reports, currently there are multiple fires in the city, the bodies of the dead people are literally lying in the streets. The militia has organized the withdrawal of people from the city, Horlivka’s center is empty.

One of Grad rockets exploded near the house with the family of three people in it. All three, including a one-year-old girl are reported dead.

The rockets were reportedly launched from the Mayorskiy village controlled by the Ukraine’s National Guard, according to the local residents’ reports.

Ukraine’s Army also shelled on Sunday the citiy of Avdiivka in the Donetsk Region.

The Ukrainian Army also started an assault on the neighboring city of Shakhtarsk.

If the Ukrainian Army occupies Shakhtarsk, they will be able to sever the main road leading to Luhansk and Russia. The cities of Donetsk, Horlivka and Makiivka, currently controlled by the independence supporters, will be completely surrounded.

The military operation launched by Kiev in the southeast of Ukraine is ongoing since mid-April, when the Luhansk and Donetsk Regions refused to recognize the legitimacy of the new government.

The fighting intensified after Donetsk and Luhansk regions proclaimed themselves independent people’s republics. Hundreds of people, including civilians have died in both regions over the past months.

Russia has repeatedly urged the Kiev authorities to stop the bloodshed in the region.