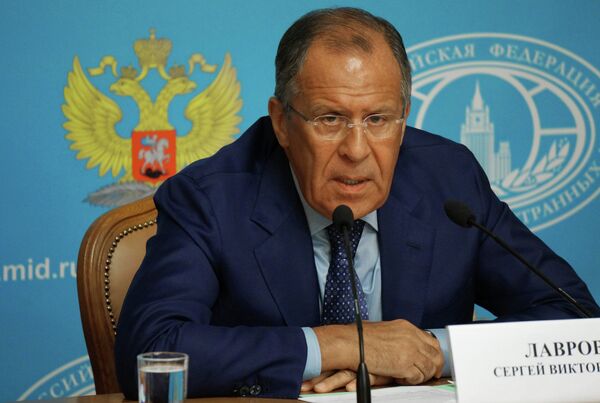 MOSCOW, July 28 (RIA Novosti) – Moscow will use all of its legal capabilities to uphold its interests in a $50-billion court case by ex-Yukos shareholders in The Hague, Russian Foreign Minister Sergei Lavrov said Monday.

“I heard an announcement that such a verdict is expected. It’s necessary to wait for the fact itself, so that it comes into being and then make some sort of comments … The Russian side, obviously, will use all of its legal capabilities at hand to uphold its position," Lavrov told journalists.

The Hague's arbitration court ruled Monday that Russia must pay a group of shareholders in the now-defunct oil giant Yukos some $50 billion, just under half of their $114 billion claim, for expropriating the company’s assets.

The Permanent Court of Arbitration in The Hague published Monday the rulings in three separate lawsuits filed by companies representing the former shareholders of Yukos, formerly led by Mikhail Khodorkovsky, once Russia's richest man.

In 2003, Russia’s authorities accused the leadership of Yukos, once the largest oil company in the country, of economic crimes. A range of Yukos managers were convicted for fraud and tax evasion. Yukos was later declared bankrupt and Rosneft bought the bulk of its assets.

Yukos’ managers contended that the Russian government illegally forced the oil firm out of business and bankrupted it, which allowed state-controlled oil company Rosneft to snap up its assets and become Russia’s largest oil producer.

Yukos founder Mikhail Khodorkovsky had spent a decade in prison for fraud and tax evasion until he was pardoned in December 2013. He denied all charges against him, saying he was punished for supporting the tiny pro-Western opposition and that the liquidation of Yukos was engineered by corrupt government officials aiming to seize lucrative oil assets.

Khodorkovsky publicly said he had no role in the court process.