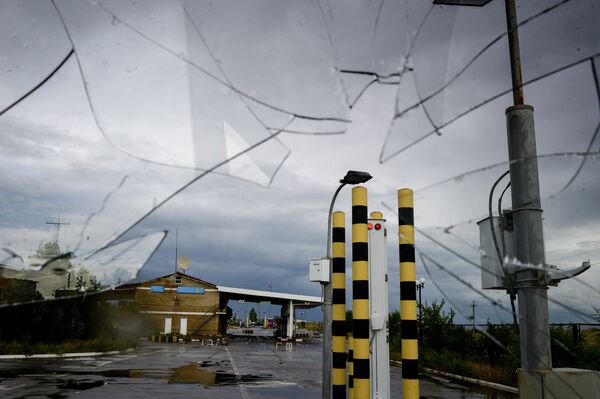 © RIA Novosti . Valeriy Melnikov
/
Go to the photo bank
Subscribe
Moscow expects that OSCE monitors will be deployed on the Russian-Ukrainian border soon and has asked the United States not to block the deployment, Russian Foreign Minister Sergei Lavrov said Monday.

MOSCOW, July 28 (RIA Novosti) - Moscow expects that OSCE monitors will be deployed on the Russian-Ukrainian border soon and has asked the United States not to block the deployment, Russian Foreign Minister Sergei Lavrov said Monday.

“We expect the OSCE monitors to arrive at the Donetsk and Gukovo border crossing points in the coming days," he said.

“In a phone conversation with [US Secretary of State] John Kerry yesterday, I asked [him] not to hinder the implementation of this agreement.”

Lavrov added that OSCE experts are at liberty to use a range of technical means, including unmanned surveillance, to monitor the situation on the Russian-Ukrainian border.

“I reminded the OSCE observer mission working [at the border] and has just extended [its stay] for another six months that it may be equipped with any means for observation. There is, of course, information from satellite observations that any country can share with the OSCE. We’re not living in the Stone Age, but in a century of super-modern technology, and to cite that we are hiding or could hide something is probably not serious,” Lavrov said.

Earlier this month, Moscow invited OSCE experts to assess the situation on the Russian-Ukrainian border, which has been hit multiple times by the Ukrainian artillery and mortar fire.

The shelling of Russian territory happened as the violent clashes between the Kiev-backed forces and militia have become more frequent, mainly concentrated in the Donetsk and Luhansk regions of Ukraine neighboring the Russian border.

At the end of last week, Russian Deputy Defense Minister Anatoly Antonov said that Russia had registered nine strikes on its territory from Ukraine in June and July.

Several Russian border checkpoints have been closed recently due to firing from Ukrainian territory. Gukovo, Donetsk and Novoshakhtinsk checkpoints were shut down as people were reported wounded in the fighting between the National Guard forces and independence supporters near the border checkpoints.

The Russian Foreign Ministry condemned the shelling of the Russian territory, urged Kiev to stop the attacks immediately and warned that these provocations might have irreversible consequences.