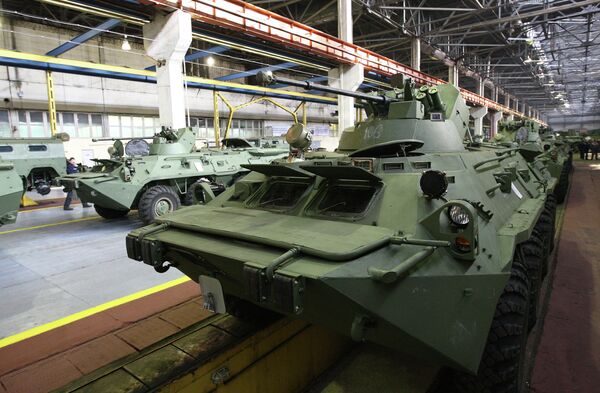 Russia’s defense industry is capable of producing all parts and military hardware on its own, Russian President Vladimir Putin said Monday.

“Some things are evident for all of us. First of all, we are absolutely capable of doing everything on our own. Absolutely everything,” Putin said at a meeting devoted to import substitution.

“Our task is to insure ourselves against risks of non-compliance with contracts by our foreign partners,” the president added. “We need to ensure reliable and timely supply of required components and monitor their quality closely.”

Putin said that although he saw no particular risks for the Russian defense industry, “all difficulties should benefit us, because we should launch our own production where it did not exist before.”

Against the backdrop of Kiev’s ongoing special operation in eastern Ukraine, the country’s recently elected president, Petro Poroshenko, banned cooperation with Russia in the military-industrial sphere.

Responding to the initiative, Deputy Prime Minister Dmitry Rogozin stated that Russia already has a plan for import substitution of military products from Ukraine and that it will take about two-and-a-half years to completely withdraw from Ukrainian defense imports.

In April, President Putin noted that Russia’s switch to domestic products would likely lead to disaster for Kiev, because Moscow is the only consumer for the Ukrainian defense industry.

After the crash of Malaysia Airlines flight MH17 in eastern Ukraine, the United States and the European Union have been seeking to toughen sanctions against Russia, including in the defense industry. The prospect if initiating an embargo against the Russian defense industry has also been raised.

Russian defense ministry officials said the situation would have no effect on Russia’s ambitious 20 trillion ruble ($640 billion) rearmament program through 2020. The program is to see the share of modern weaponry in Russia’s armed forces reach 30 percent by 2015 and 70 percent by 2020.