One in Two Germans Backs Harsher Sanctions Against Russia – Poll 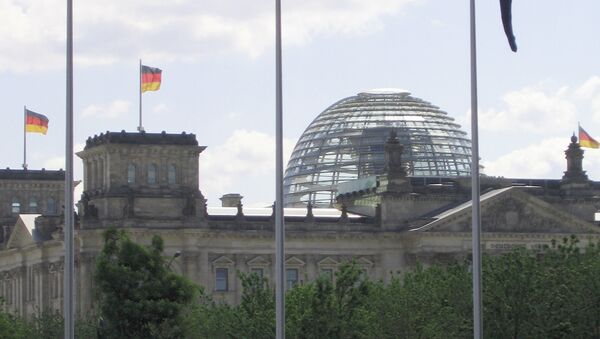 © Sputnik
Subscribe
More than 50 percent of Germans would back tougher sanctions against Russia even if they meant a loss of “many jobs” and a slowdown in the nation’s economic growth, according to a telephone opinion poll published by German weekly news magazine Der Spiegel.

BERLIN, July 28 (RIA Novosti) – More than 50 percent of Germans would back tougher sanctions against Russia even if they meant a loss of “many jobs” and a slowdown in the nation’s economic growth, according to a telephone opinion poll published by German weekly news magazine Der Spiegel.

“For the majority of Germans who took part in the opinion poll economic interests of their country took a backseat to tougher sanctions,” the report, published Sunday, said.

According to the poll, 52 percent of respondents would back harsher sanctions against Russia following the alleged downing of the Malaysia Airlines passenger plane over Ukraine on July 17.

Thirty-nine percent of those polled said they wanted public opinion at home to be measured before approving further sanctions. Some 40 percent said they trusted the government to act on Russia as it saw fit, while 54 percent spoke against Berlin deciding this step on its own.

Market research company TNS-Infratest conducted the survey among 1,000 citizens between July 23 and 24 on behalf of the magazine.

The European Union is discussing new, sector-wide sanctions against the Russian economy, with curbs to be placed on Russia’s access to European financial markets, trade in military equipment and energy technologies, as well as on exports of goods to Russia that could be used for military purposes. European Council President Herman van Rompuy published an open letter Saturday urging these steps.

“Further sanctions targeting entire sectors of the economy are not a justified tool to solve the political conflict," Wansleben said.

“Russia is among the Germany’s top-10 trade partners. 300,000 jobs in Germany depend on the export of German goods to Russia. Moreover, Russia is Germany’s major supplier of oil and gas, accounting for 35 percent of the deliveries,” he stressed.

The Russian Foreign Ministry previously called the “language of sanctions” counterproductive and said these measures would have a boomerang effect on European economies.