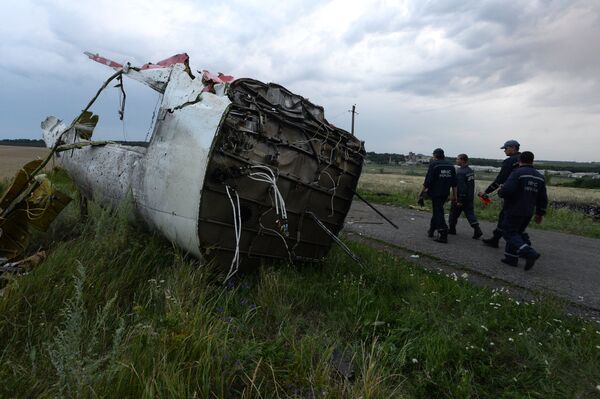 "We do not understand why the Americans, who claim that they have some irrefutable evidence in support of their theory, fail to make this evidence public," Lavrov told reporters.

The foreign minister noted that Kiev has so far failed to provide the recorded conversations between Ukrainian air traffic control and flight MH17.
"According to some information, it is forbidden for these air traffic controllers to talk to anyone. It all raises numerous questions," the Russian top diplomat continued.

Earlier, a number of media outlets reported that the Ukrainian Security Service (SBU) confiscated tapes of conversations between Ukrainian air traffic control officers and the crew of the Malaysia Airlines plane that crashed last week.

On Wednesday, a Ukrainian government source told RIA Novosti the SBU could hand over the MH17 recordings to US analysts in Kiev.

The Malaysia Airlines plane, carrying 298 people, including 85 children, was downed on July 17 near the town of Torez in eastern Ukraine’s Donetsk Region. There were no survivors.
The Ukrainian government and the militia forces in the country’s east have blamed each other for the downing of the airliner, with independence supporters saying they lacked the equipment to shoot down a target flying at altitude of 33,000 feet.

Two weeks ago US Secretary of State John Kerry said there is "an enormous amount of evidence … that points to the involvement of Russia" in providing anti-aircraft systems and training to those the US believes are responsible for the downing of the airliner. However, the United States hasn't so far disclosed any relevant information on the crash.

A Russian General Staff official stated a week ago that Russia had never delivered air-defense missile systems or any other type of weaponry to independence supporters in eastern Ukraine.

Moscow has repeatedly warned against making hasty conclusions and politicized statements related to the crash, and called for an impartial investigation into the circumstances surrounding the tragedy.