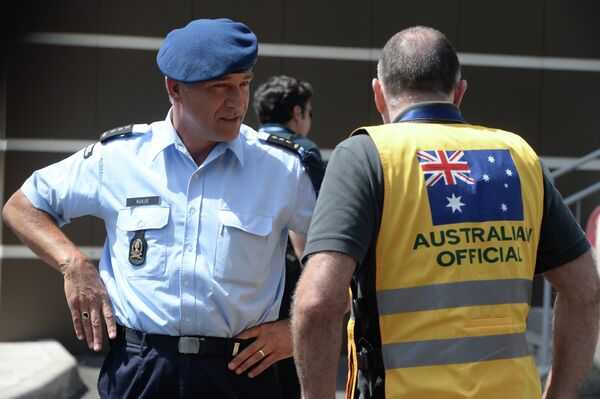 © RIA Novosti . Mikhail Voskresenskikh
/
Go to the photo bank
Subscribe
A roup of international aviation experts and policemen have refused to work at the Malaysia Air Boeing 777 crash site due to security concerns, and decided instead to return to Donetsk, a representative of the OSCE delegation told RIA Novosti Monday.

MOSCOW, July 28 (RIA Novosti) - A roup of international aviation experts and policemen have refused to work at the Malaysia Air Boeing 777 crash site due to security concerns, and decided instead to return to Donetsk, a representative of the OSCE delegation told RIA Novosti Monday.

Earlier today, the group arrived in the Ukrainian city of Torez where the plane crashed on July 17. The group consists of Dutch and Australian experts, as well as policemen from Holland.

The group was organized by OSCE representatives, but had to change its itinerary due to the ongoing clashes between Kiev and independence forces, particularly in the city of Shakhtarsk. Upon its arrival in Torez, the group made a decision to return to Donetsk.

The deputy head of the Council of Ministers of the self-proclaimed People’s Republic of Donetsk, Vladimir Antiufeev, pledged at the press conference that the authorities of the region continue to do their best to facilitate the experts’ work. Antiufeev stressed, however, that Kiev was intentionally derailing the mission.

A Malaysia Airlines Boeing 777 with 298 people, including 27 Australian citizens, on board crashed on July 17 near the Ukrainian city of Torez. On July 21, the UN Security Council unanimously adopted a resolution, which was praised by the Russian Foreign Ministry.

The 15-member council said in a resolution it "supports efforts to establish a full, thorough and independent international investigation into the incident in accordance with international civil aviation guidelines."

Earlier today, Russian Foreign Minister Sergei Lavrov expressed hope that no one would attempt to corrupt the investigation into the crash of the airliner.

“We hope that sensibility will prevail and at the forefront we all put the task of explaining the truth, holding an absolutely unbiased investigation, without any attempt to anticipate its results. We hope that our partners, who have said long ago that they have some sort of uncontestable information, will make this information public and open, and won’t cite confidentiality, secrecy or any other reason," Lavrov said during a briefing Monday.

The Ukrainian government and militia forces have been blaming each other for the downing of the airliner, with independence supporters saying they lacked the equipment to shoot down a target flying at altitude of 32,000 feet.