Spanish Protesters Rally Outside US Embassy Against Ukraine War 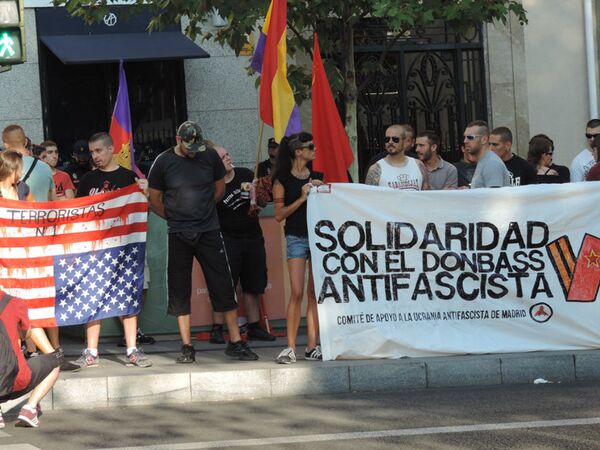 Nearly one hundred protesters gathered outside the US embassy in Madrid. Most demonstrators are Spanish nationals while some participants of the rally come from Ukraine.

“We believe that the United States is directly involved in all the recent events in Ukraine, including Maidan. They are linked to the military coup in Kiev, mass murders happening in Ukraine, especially in Donbas,” one of the protest leaders told RIA Novosti.

“We demand the US to make every effort to stop these killings so that peace is restored in the region. We condemn the imperialist stance of the US and the EU and call against the fascist Ukraine,” he said.

The Madrid Committee in Support of Anti-Fascist Ukraine, that has organized the event, is collecting money to provide the citizens of Donbas with humanitarian assistance.

Since mid-April, Kiev authorities have been conducting a special military operation in the east of Ukraine to suppress the independence movement. The violence intensified after the eastern Luhansk and Donetsk regions declared independence from Ukraine in May. Hundreds of people, including civilians have died in both regions over the past months.

Moscow has described the ongoing military action as a punitive operation and called for an immediate end to the bloodshed.