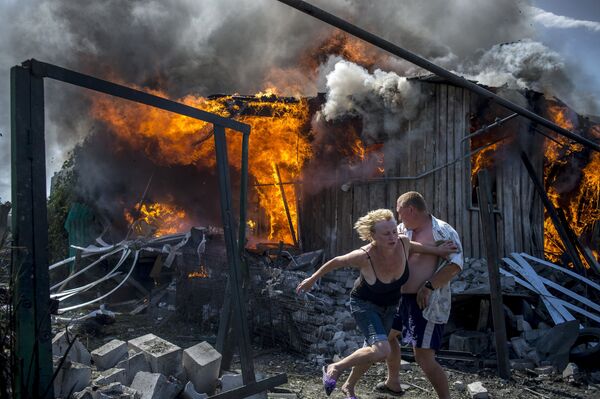 Russia says it has evidence that Ukraine used phosphorus bombs on populated areas in the country’s east, the deputy head of operations at Russia’s General Staff said on Friday.

MOSCOW, July 25 (RIA Novosti) – Russia says it has evidence that Ukraine used phosphorus bombs on populated areas in the country’s east, the deputy head of operations at Russia’s General Staff said on Friday.

“Today, we have reliable confirmation that phosphoric ammunition was used in the cities I’ve noted and in populated areas of Ukraine,” Maj.Gen. Viktor Poznikhir said on Rossiya-24 television.

He said that confirmation comes from the characteristic signs of using phosphoric ammunition.

“This is the high-speed descent as opposed to star shells that give out bright burning elements over a large area that look like raining sparks that create large fires in the areas they fall in and have a high burning temperature,” he said.

“Russian Defense Ministry has carefully studied the existing information on numerous cases of phosphorous and cluster bombs being used by the Ukrainian Army against civilians,” he added.

Chief Surgeon of the Armed Forces of Russian Federation Nikolai Efimenko said that use of phosphorous bombs may have irreversible consequences on people and may also have a negative impact on environment. Phosphorous poisoning may cause serious illnesses and even lead to death.

Since Kiev launched special military operation against independence supporters in eastern Ukraine in April, hundreds of people, including civilians and journalists on professional duty have died in the region.

Last month, Moscow officials said that they may submit an inquest to the Organization for Prohibition of Chemical Weapons (OPCW) on the possible use of chemical weapons in eastern Ukraine.

Ukraine’s Security Service earlier confirmed that an unknown substance was found in the burnt building in Odessa, after the May 2 tragedy. Although Kiev officials insist most of the victims died of smoke inhalation or were killed when jumping out of windows, media reports suggest that many of the dead were poisoned by an unknown toxic chemical.

In June, the independence supporters’ representatives said unidentified chemical weapons have been used by the Ukrainian army in an attack on the village of Semenivka near Slaviansk in Ukraine’s east. Local militia leaders argued people showing symptoms of chlorine poisoning had been admitted to local hospitals.

Moscow has described the ongoing military action as a punitive operation and has repeatedly called on Kiev to resolve the conflict through peaceful dialogue.