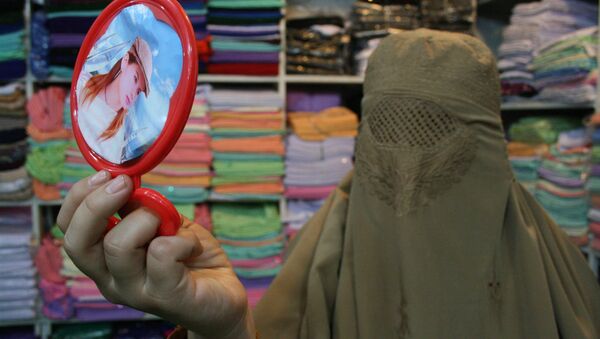 © RIA Novosti . Sergei Novikov
Subscribe
Sarah Neary
All materials
In Pakistan, callous acid attacks have been taking place for years but this time around, the societal problem is being put in the spotlight during the month of Ramadan.

In Pakistan, callous acid attacks have been taking place for years but this time around, the societal problem is being put in the spotlight during the month of Ramadan.

Founder of Depilex Smileagain Foundation Masarrat Misbah told Rossiya Segodnya about how innocent girls are becoming victims of acid attacks in Pakistan and how not only the government but the society as a whole is trying to keep it hidden.

Her foundation is trying to shed light on, especially during this holy month of Ramadan, how far these women have gone in their struggle to empowerment.

Never-ending tears—that is what many of Pakistan's youth face after acid is splashed on their face by men who wish to marry women but are denied or disputes over property are involved. “They normally do not pay the girl her right of inheritance, they could actually burn her or throw acid on her just to shut her up,” Founder Masarrat Misbah explained to Rossiya Segodnya.

According to pri.org, 150 acid attacks took place in Pakistan. While varying statistics are out there on how many females have faced the troublesome truth of being deemed an acid survivor, that number is highly under reported.  Ashamed of how society will look at them, a good amount of women are thought to be hiding their acid-melted faces from the light of day, just to please their family and take tension off the eyes of the public.

What is worse—when such an atrocity happens to a Pakistani woman, the person investigating the crime will ask the traumatized female what she did to deserve this. In other words, the person is already assuming it is her fault and she must have done something to be punished in this manner. An attitude like this seems disgraceful, especially to a vulnerable victim of such an unforgiving crime.

Not only are women scrutinized by their society after being whipped in the face with acid, burning away at their flesh and outer beauty, the government has not done such a good job at promoting the laws that are out there to protect women against these crimes.

“Women are not aware that in the last three years a bill has been passed for a person who throws acid,” Misbah stated. The suspect needs to first be caught, then tried in court, and if found guilty they will be given a life sentence for their wrong-doings as well as being forced to hand over a certain amount of compensation to their victim.

However, rarely is it seen that a male is ever taken to court over such a crime. Instead, everything happens behind closed doors where nobody is watching.

“Normally say you will see your girl is probably going to die, she's not even a person worth living. [The men say] so why don't you take this amount and let our boy go, let him not go behind bars,” Misbah said, adding that the families usually make a money deal.

Though, the payout is far too little to cover all the expenses, and in the end, the courts most likely could have given them more. Disputes are solved with broken promises and meaningless handshakes, while at the end of the day, the fragile woman suffers silently hiding away from the public eye to cry away the pain that has been brought onto her by so many people.

Although the public condemns such crimes from the societal and religious point of views, it does not mean that there is no price to pay. The community finds it entirely difficult to accept a girl that has had acid thrown on her.

So even though such heinous acts do not sit well with the general population, the end result—a melted face thanks to an acid attack—extremely does not sit well with people, leaving a female feeling isolated in Pakistan.

What is even more heart wrenching is the fact that the acid attacker can flee town and start his life over again in a new district, unpunished and with his reputation intact. It is a type of double-edged sword that is happening in Pakistan's society, while women are hurt and shunned, men are let off easy with not a care in the world.

If the ordeal ever makes it to a courtroom and the man is actually found guilty of his wrong-doing, he may get a measly seven years in prison while the woman he hurt is stuck in a mental prison for the majority of her lifetime.

The punishment does not suit the crime and all of the victims know this for certain.

Their soul begs for mercy to get through another torturous day as the man slides past the legal system, a practice way too common for this day and age.

“I see these girls who suffer every day and night of their life and if you ask them what kind of punishment would you like that person [the acid attacker] to get, they would always inevitably say I'd like to do the same to them [to pour acid on them],” Misbah admitted.

Depilex Smileagain Foundation has helped 560 girls and is eager to help more that have been left in isolation due to brutal acid attacks.

The females, usually between the ages of 13-26, all have horrific stories about their experience of being assaulted.

In one situation, a married woman named Kamwal wanted to get an air hostess job to earn some extra money for her family. However, to her dismay, the day she was supposed to start was the same day her husband decided to douse her in acid.

“She lost her eyes, she's lost her nose, she was in hospital for a good three months,” Misbah said, adding that when she had been released from the hospital her children no longer recognized her.

Kamwal's husband did not accept her job as he believed she was too beautiful and would turn into a woman of bad character.

After 30 surgeries and a lot of internal healing the woman has finished her education and her children are now attending school without the help of her acid-attacking husband.

This is just one story out of hundreds that have been happening for way too long in the nation of Pakistan. As long as acid is easily accessible to purchase in the open market or black market, there will be incidents like these that will continue to happen with the government watching it go on and never reacting. Even if law enforcement reacts, it is not considered to be enough to protect the withered women, better known as the fragile minds of those melted by acid.

For the entire month of July, Depilex Smileagain Foundation has been carrying out a campaign to promote the idea of women, who have been attacked with acid, becoming empowered.

The foundation is asking for donations from the community or for people to drop by and spend some time with the girls, as every bit of attention counts. Misbah said, “tell them that you love them, tell them that you care, and this is beneficial for us.”

Every success story post-acid attack is one step closer to victory for women to live a normal life. While there are still many battles to win and many more to convince about the acid-sale regulation in Pakistan, each step is one forward toward progression.

The hurt women may have lost their eyes, ears, chin, and many tears to go along with it—but they have this inner power so strong that it gives them the courage to live on another day.