Moscow Must Close a Yawning Gap in Its Financial Armor 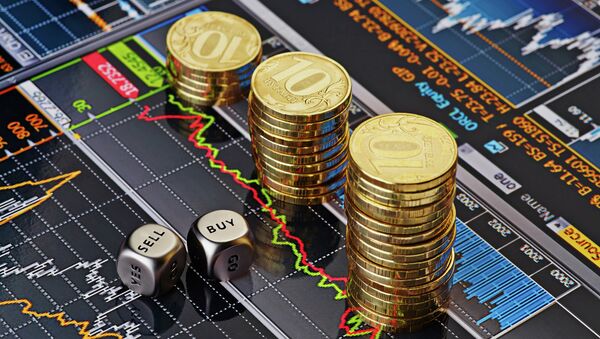 © Fotolia / sergey_p
Subscribe
International
India
Africa
James George Jatras
All materials
To limit its vulnerability to western sanctions, especially against its financial sector, Russia for several months has been moving away from the US dollar as the main medium of international trade.

WASHINGTON, July 25 (RIA Novosti), James George Jatras — Notably, Moscow is preparing to accept Russian and Chinese currency – rather than the reigning petrodollar – as it implements the landmark $400 billion, 30-year gas supply deal signed by President Vladimir Putin in Shanghai; Russia has sold off large quantities of its holdings of U.S. Treasuries; a national payment card system as an alternative to Visa and MasterCard is under consideration, as is requiring foreign Internet payment systems such as PayPal to make security deposits to continue operating in Russia.

De-dollarization and limiting foreign, especially American, leverage over Russia’s financial system and economy is deliberate, coordinated, and directed from the highest levels.

How then to explain a recent move that largely unravels this emerging, comprehensive strategy?

On June 30 President Putin signed a law requiring Russian banks to report information on American accounts to the U.S. Internal Revenue Service (IRS) in compliance with the so-called “Foreign Account Tax Compliance Act” (FATCA), enacted by the U.S. Congress in 2010.

FATCA, which went into effect on July 1, constitutes perhaps the most sweeping extraterritorial financial power-grab by any country in world history. It requires every single Russian bank (and indeed every non-U.S. financial institution in the world) to report details on the accounts of “U.S. Persons” (broadly defined) to the IRS, with compliance costs running into the millions of dollars per institution.

Because Russian banks are outside American jurisdiction (or stated differently, are no more obligated legally to submit to American law than domestic U.S. companies are subject to, say, Russian law), Washington seeks to compel compliance by threatening unilateral sanctions: banks in Russia and other countries failing to supply the information demanded by the U.S. government would be deemed “recalcitrant” and slapped with a 30% deduction from all American-sourced payments to that institution. Because so many of the world’s financial transactions are denominated in dollars and flow through the US banking system, the threat is credible.

Seen through the lens of the Kremlin’s de-dollarization strategy, Moscow’s proper response to FATCA is clear: inform Washington that in Russia only Russia’s laws are enforced, not America’s or anyone else’s. Any deductions of payments to Russian recipients would be treated as what they are: extra-legal confiscations of private property and illegal sanctions to be met with WTO challenges, legal action against US banks in their capacity as enforcing agents of the IRS, and, if necessary, asymmetrical countermeasures.

Last November, the Russian Foreign Ministry issued a statement accurately characterizing FATCA as “counterproductive” (to its supposed purpose of tax enforcement), “exterritorial” in its “essence,” and “at odds with the principle of sovereign equality” in its demand “that foreign lending-financial institutions comply with American law.”

But in compelling Russian financial institutions’ submission to FATCA, the new Russian law now reverses the sound position earlier articulated by the Foreign Ministry. The damage promises to be significant, especially if financial sanctions are ratcheted up:

• As a matter of principle, it subjects Russian banks to the administrative authority of the U.S. Treasury Department, placing a key sector of Russia’s economy under foreign supervision.

• It reinforces the US dollar’s sway over the Russian financial system, which Moscow otherwise seems determined to weaken.

• It sucks billions of dollars out of the Russian economy and into the pockets of consulting, law, accounting, and software firms – many of them US-based.

• Most ominously, since under U.S. law data reported to the IRS under FATCA is not considered confidential “tax return information,” it is subject to transfer to the NSA and other US intelligence agencies. Financial data mined through FATCA compliance (including the risk of malware insertion through the compliance portal) would enhance a financial social accounting matrix for mapping contacts, relationships, and activities of a wide range of persons and institutions. One could hardly imagine a more valuable payload for intelligence monitoring and management. The Orwellian implications are more menacing than anything thus far revealed by Edward Snowden.

Why adopt an anomalous policy that undermines Russia’s broader policy initiative? It appears two factors have been influential.

First, Russian banks, like banks in other countries, rely on consultants who tell their Russian clients that they have no choice but to submit to FATCA. This advice is far more beneficial to the US authorities and to the consultants themselves (who will rake in billions of dollars in fees) than to their clients.

Second, the suggestion has been made that FATCA could be useful for curbing the hiding of assets abroad by Russians, especially officials. Indeed, Moscow had attempted to negotiate an “intergovernmental agreement” (IGA) of the type the US. Treasury Department has signed with about 40 other countries to provide for “reciprocal” reporting of assets deposited in the United States to the foreign “partner” government. As one Moscow-based consultant put it: “A treaty would have bridged the gap between the two alien legal systems.”

However, expectations of any benefit to Russia from FATCA, even with an IGA, are unfounded. To start with, contrary to widespread belief in Moscow and other capitals, the IGAs are not treaties and have at best questionable status under U.S. law. Even the Treasury Department admits it has no legal authority to require US banks to provide FATCA-equivalent information to foreign governments. Hence, Moscow could expect no useful information from the American side, no matter what Treasury says. In a word, United States promises of reciprocal reporting to Russia are a sham. (Even FATCA’s advocates concede that direct enforcement is “wholly unachievable” due to privacy protection laws in many countries, including Russia, that don’t allow personal data to be sent to unauthorized recipients. Also, the IRS doesn’t have the resources to enforce regulations directly against hundreds of thousands of institutions in almost 200 countries. For the US, the value of the IGAs – which are not authorized or even mentioned in FATCA or any other statute – is both to negate inconvenient foreign laws and to shift the compliance headache onto foreign governments to enforce US law against their own citizens.)

In any case, while Washington remains keen on pressing an IGA onto every other country in the world in perpetuation of a unipolar, US-based financial order, it has broken off negotiations with just one country: Russia. Senators John McCain and Carl Levin say that forcing Russia to comply with FATCA directly – without an IGA – should be part of the price imposed on Moscow for “threatening and continuing to destabilize Ukraine.”

The new Russian law walks right into that trap. Having accepted the IRS’s authority, Russian banks would have to contend with nightmarish FATCA regulations that even American specialists find baffling. On top of that, the law signed on June 30 includes a scheme that keeps a final Russian hand on compliance involving Rosfinmonitoring, the Federal Tax Service, and Russia’s Central Bank. Banks could only provide personal account information with the client’s “consent”– under the threat of closing the account. According to reports, Russian banks are reversing earlier plans to dump US clients in an effort to shield themselves from FATCA. (It remains to be seen if that reversal will be maintained. Even in countries with IGAs, starting with the predictably supine United Kingdom, banks still are closing accounts under the erroneous notion that turning away American business will shield them from FATCA and lessen compliance costs. While that “strategy” has turned American expatriates into financial lepers, it does little to impress US bureaucrats that a bank has “due diligence” in place to enforce FATCA’s horribly complex requirements.)

In the end, the Russia law constructs a kind of a one-sided faux IGA, where the Russian authorities seek to maintain the pro forma right to their manage banks’ compliance while the US side will continue to insist on direct, unconditional, and (in Russia’s case) arbitrary and discriminatory compliance. Russian banks can expect the worst of all worlds: abject submission and crushing costs plus the continued risk of sanctions when Washington is dissatisfied their performance. With some in Congress pressuring the Treasury Department to “find” Russian compliance insufficient, we can expect Russia’s banks to receive treatment worse than that meted out to France’s BNP Paribas and to Swiss banks, which are “guilty” mainly of following their own countries’ law instead of American law.

The irony in all this is that Russia’s capitulation to this expensive, invasive, and anti-sovereign US demand is unnecessary. A FATCA repeal bill has been introduced by Senator Rand Paul, a leading 2016 presidential prospect. The Republican Party, which earlier this year approved a resolution advocating FATCA’s repeal, will continue to control the House and will likely capture the Senate this year. Meanwhile, here in Washington, FATCA is facing a legal challenge in court on constitutional and statutory grounds. Thus, FATCA is hardly the impregnable fortress the U.S.-based consultants are telling Russian banks it is.

FATCA should be seen for what it is: a one-sided demand for U.S. control of Russia’s financial sector, backed up by the threat of extra-judicial sanctions. Complying with it is inconsistent with Russian sovereignty and the Kremlin’s plan to reduce Russia’s financial and economic vulnerability. Moscow should scrap the new FATCA compliance law and work out an anti-sanctions counterstrategy, perhaps in coordination with Beijing (which at last report also is considering an IGA under phony promises of reciprocity). Instead of helping Washington to maintain its hegemony over the Russian and global financial systems, the Russian government and financial community would be better advised to return to the position earlier articulated by the Foreign Ministry.

Moscow’s rejection of FATCA could be a catalyst for its worldwide collapse. This would also help forces in the United States who see in FATCA a grave threat to privacy and personal freedom and are working to get rid of “the worst law most Americans have never heard of.”

Finally, and most relevant to authorities in Moscow, rejecting FATCA would safeguard Russia’s financial system from foreign control and penetration. This is one window of vulnerability that must be shut immediately.

James George Jatras is a former U.S. diplomat and US Senate staffer. Now a Senior Fellow of the American University in Moscow and a Washington-based government and media relations specialist