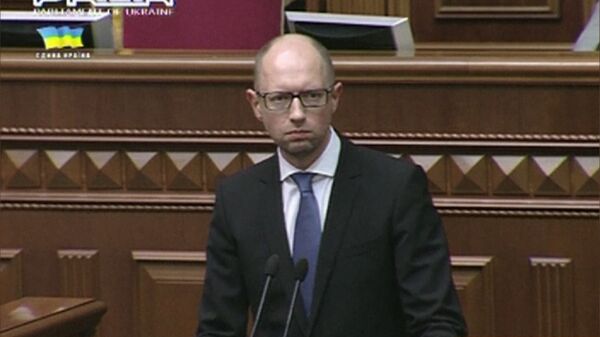 “If no new coalition is formed and the existing coalition in a parliamentary-presidential republic had collapsed, the government and the prime minister have to resign. I announce my resignation because of the coalition’s collapse,” he said.

Yatsenyuk also expressed disappointment with Ukrainian parliament’s decision to reject a bill that allows the government to hand over up to 49 percent of the country’s gas transport system to investors from the European Union and the United States.

Parliament speaker Oleksandr Turchynov said parliamentary factions of the Svoboda and UDAR parties were to put forward the candidacy of the interim prime minister.

According to the Ukraine’s constitution, the resignation of Prime Minister entails resignation of the entire Cabinet. Cabinet of Ministers, dissolved by the Verkhovna Rada (Ukrainian parliament), will continue to function until the new government is formed.

Earlier on Thursday, Ukraine’s Svoboda and UDAR parties announced their factions in the parliament were quitting the majority coalition, paving the way for the dissolution of parliament.

The majority coalition in the Ukrainian parliament, created after the February coup, had 256 members, the vast majority of them representing the former opposition parties of Batkyvshchina, UDAR and Svoboda.

With today’s resignations from the coalition, their number has fallen below the constitutional threshold of 226 members, giving the president the legal power to dissolve parliament in one month.