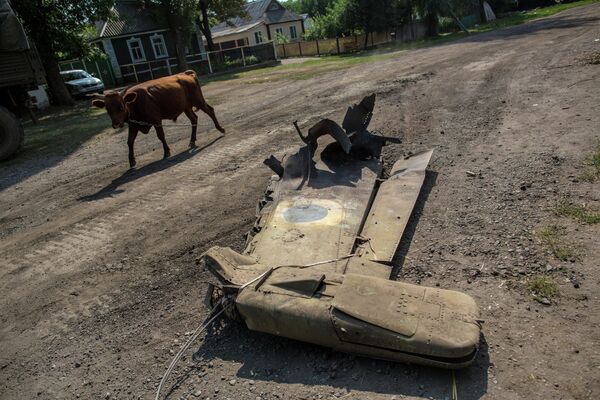 The Russian Defense Ministry has labeled Ukraine’s claim that two Su-25 attack aircraft were shot down in eastern Ukraine from Russia as “hogwash.”

On Wednesday, independence forces in eastern Ukraine’s Donetsk region said they downed two Su-25s. Later in the day, a spokesman from Ukraine’s National Security information center, Andriy Lysenko, said during a briefing that the planes were downed by rockets launched from Russia.

“According to Lysenko, it turns out that these planes weren’t just shot down from Russian territory, which in itself is hogwash, but [were shot down] with a single rocket and launched from a rocket system yet unknown to science: ‘powerful action [rocket system],’” a source in the Russian Defense Ministry said Thursday.

This is not the first unjustified accusation by Kiev against the Russian Defense Ministry, a high-ranking military official told RIA Novosti last week.

“We are being accused almost every day, with Kiev promising to provide ‘undeniable evidence’ as soon as possible. However, this ‘evidence’ tends to disappear without a trace, and they try to cover up the embarrassment with new and even more bizarre accusations,” the official said.

Kiev also accuses independence supporters in eastern Ukraine for shooting down a Malaysia Airlines Boeing 777 on July 17, but cannot provide any evidence. The local militia leaders ensure that they do not have weapons capable of shooting down a plane flying at 32,000 feet.

A Malaysia Airlines flight MH17 heading from Amsterdam to Kuala Lumpur crashed July 17 near the city of Donetsk in Ukraine, killing all 298 people on board.

United Nations, Russia, and heads of several countries stressed an importance of a transparent international investigation to determine the circumstances and causes of an accident.