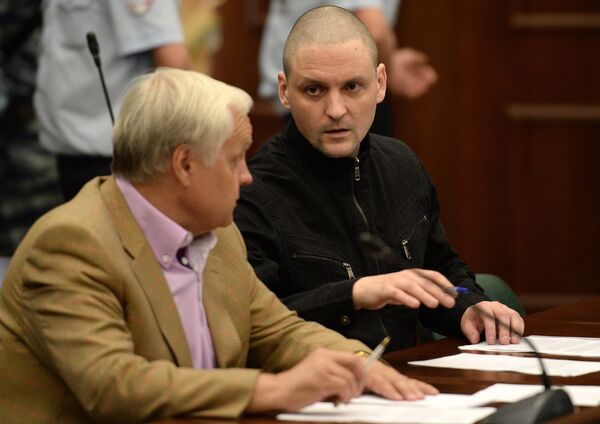 Udaltsov, a leader of the Left Front opposition movement, and Leonid Razvozzhayev, a member of the same leftist group, have been charged with plotting to incite mass riots in Moscow at a large rally on May 6, 2012.

Shortly after the sentence was passed, Udaltsov announced a hunger strike, calling the verdict “political massacre.” Udaltsov, who has been under house arrest since February 2013, was taken into custody in the court.

A lawyer for Razvozzhayev said his client plans to appeal the verdict, while stating: “We are realists and we understand that the jail term could have been harsher.” Razvozzhayev faced up to 10 years in jail.

Russian prosecutors said both men had also planned to stage similar rallies in other regions across Russia. The defendants and their lawyers insisted on a non-guilty verdict.

The court ruled that it has been completely proved “that the legally organized public event on Bolotnaya Square on May 6 turned into mass riots.” Witnesses and victims said that Udaltsov had provoked the riots by staging a sit-in strike, while his accomplices organized a tussle.

Hundreds of people were detained following clashes with the police at the rally.

Moscow's Zamoskvoretsky Court earlier sentenced eight other participants of the riots to between three years and three months to four years in jail. Several other suspects were pardoned.

A witness in the case against Udaltsov and Razvozzhayev, Konstantin Lebedev, who had earlier admitted his guilt in organizing mass riots and was sentenced to two-and-a-half years in prison, was released on parole in May.

The investigation into Udaltsov and Razvozzhayev was opened after the pro-Kremlin TV channel NTV aired footage in October 2012 that it claimed showed the two men and another Left Front activist meeting with a Georgian politician to plot the destabilization of Russia.

Razvozzhayev fled Russia soon after the show was aired, and had been charged with illegally crossing the country’s border with Ukraine to evade prosecution.