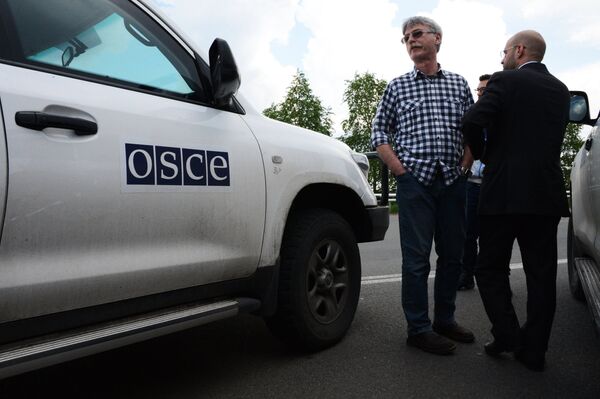 “The stance taken by Ukraine, the United States and Canada during the ratification of OSCE decision [to send observers to the Russian checkpoints] is deplorable. The members of these countries created obstacles to reaching agreement, took the positions of the Berlin declaration [on immediate return to ceasefire in Ukraine] out of context misinterpreting the main points of the Russian initiative. Finally, common sense prevailed and the decision was taken unanimously,” the ministry said in a statement.

On Thursday, following ten days of negotiations, the OSCE Permanent Council made a decision to dispatch 16 monitors to Donetsk and Gukovo checkpoints on the Russian-Ukrainian border.

The mission will work for three months, as the observers monitor the checkpoints' operations and track the movement across the border.

Earlier this month, Moscow invited OSCE observers to assess the situation on the Russian-Ukrainian border, which has been hit multiple times by Ukrainian artillery. In a recent incident, on July 13, shells exploded in the Russian city of Donetsk in Rostov region, killing one civilian and injuring two more.