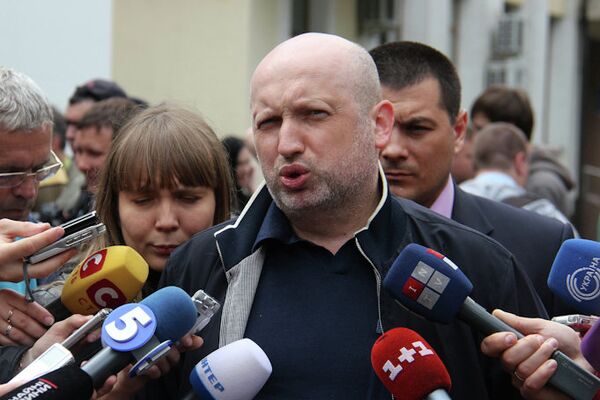 Ukrainian parliament speaker Oleksandr Turchynov announced that the Communist Party, who occupy 23 seats in the Verkhovna Rada, would be dissolved on Thursday.

KIEV, July 23 (RIA Novosti) – Ukrainian parliament speaker Oleksandr Turchynov announced that the Communist Party, who occupy 23 seats in the Verkhovna Rada, would be dissolved on Thursday.

On Tuesday, the Verkhovna Rada, Ukraine’s parliament, made changes to its rules that would allow the speaker of the house to dissolve the Communist party. Ukrainian President Petro Poroshenko signed a bill on Tuesday evening legalizing the move.

“Yesterday, a bill was signed that brings changes to the rules … Tomorrow morning [Thursday], it will be published in Golos Ukrainy [official newspaper of the Verkhovna Rada], meaning it will come into force, and I will fulfill a historic mission and announce the Communist Party’s cessation," Turchynov said while opening Wednesday’s parliamentary session.

In early May Communist Party leader Petro Symonenko stated that if he were the head of state, he “would immediately call back all the troops” from the east of Ukraine, calling special operations in Donetsk and Luhansk regions “war against the people.”

In response to that, then acting Ukrainian President Oleksandr Turchynov asked the country’s Justice Ministry to look into the Communist Party’s alleged separatist activities and possibly ban the party. The ministry brought charges against the party, accusing it of anti-constitutional activities, supporting independence forces in the east of the country and challenging Ukraine’s territorial integrity.

Russia’s parliament issued a statement in late May, condemning Kiev’s attempts to ban one of the oldest parties in the country. Russian lawmakers were convinced that “pressure on the [Communist] party was a result of its harsh criticism [of the new government] and the reason for the ban is to suppress dissent in Ukraine.”

Ukraine’s Communist Party was an ally of the Ukraine’s former ruling Party of Regions, the support base of both parties is mostly in the east of Ukraine. Both parties lost their positions after the new government came to power following a coup in February.