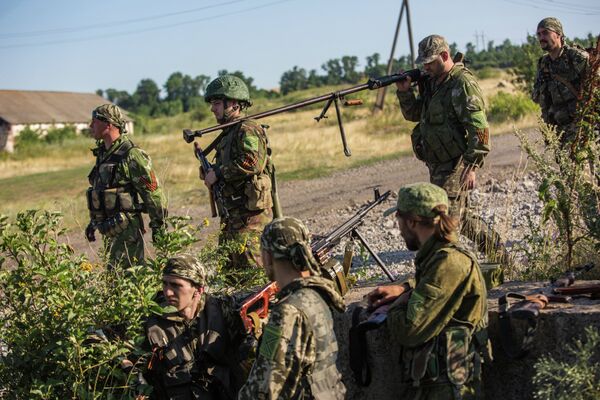 Such allegations are nothing but “nonsense,” said a representative from the DPR Office of the Prosecutor General, nicknamed Illya Ugryumy (Gloomy).

“We are waiting for ICAO [International Civil Aviation Organization] experts, so it would not make sense to falsify plane parts. They [ICAO expert] can tell the fake parts from the real ones anyway,” he said.

Meanwhile, Kiev authorities have been doing everything they can to undermine the investigation into the crash, he said.

“They launched air strikes at the time the group of Malaysian [experts] was approaching the crash site. Yesterday [Tuesday], they shelled a nearby village even though there hadn’t ever been any self-defense forces there. A big group of ICAO experts arrived in Kiev a long time ago but is not allowed to approach the crash site,” Ugryumy said.

The residents of Hrabove, a village in Donetsk Republic, had to spend all night in basements because Ukraine military jets were flying over their homes, he said.

“It’s the DPR that is interested in a thorough investigation because we are not guilty of anything,” Ugryumy said, adding that the accusations that militia “removed bodies” were absurd.

“The bodies were collected by the local Emergencies Ministry's officers with miners and self-defense forces also volunteering their help. Kiev didn’t provide any help in searching for and collecting the bodies, that is why the process took a lot of time,” the DPR representative said.

Earlier in the day, Sky News reported citing UK intelligence sources that militia planned to sabotage the investigation into Malaysian plane disaster by scattering parts of other planes at the crash site and removing victims' remains.

The Malaysian plane with 298 people on board, including 85 children, crashed on July 17 near the town of Torez in eastern Ukraine’s Donetsk Region. No one survived.

The Dutch Safety Board (DSB), which took over formal responsibility for the air crash investigation from Ukraine Tuesday, said that an international team of 24 experts, including Russian and Ukrainian analysts, will investigate the incident.