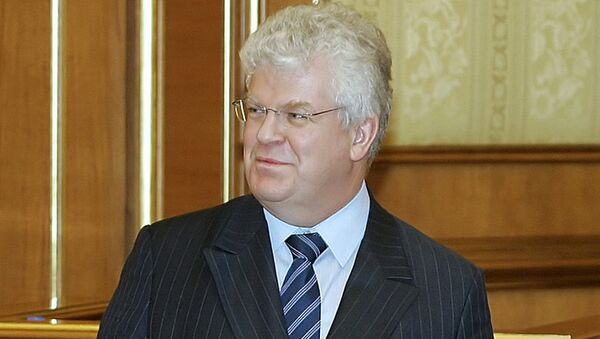 “We handed it [data] on Tuesday, as soon as we got it in writing in Russian and English. We forwarded it to all the people concerned,” Chizhov told journalists in Brussels.

“There has been no reaction so far,” Chizhov added.

Russia's Defense Ministry revealed on Sunday its information on the situation in the Donetsk Region ahead of the Boeing 777 crash last Thursday. The presented data raised questions for Kiev, as it showed an unusual activity of Ukrainian combat forces on the day of the tragedy, a Buk missile system placed near the territory held by independence supporters, and a military plane that approached the Malaysian airliner just before the crash.

The presented data has so far caused only thr US reaction with the US authorities questionning the claims Russia made.

“[The reaction] was rather predictable - they [the US] questioned the Russian data. It is their right. But if they are in doubt, they should have presented their own evidence, which they haven't done so far. Let me add that Americans have never presented factual proof in such situations, calling their information surveillance, which can discredit sources if revealed, and so on,” Chizhov said.

The envoy recalled the scandal the United States found itself in 1988, when a US missile cruiser Vincennes shot down an Iranian airliner, killing 290 civilians, as it mistook the plane for a military aircraft. At that time, then US President George Bush Sr. said, “I will never apologize for the United States — I don't care what the facts are.”

The Russian EU envoy warned against preliminary conclusions about the causes of the crash that could determine the course of the investigation.

“I am taken by surprise by the statements of certain European representatives. Attempts to pre-empt the result of the investigation can be seen only as pressure on the investigators. Trying to make it [the investigation] fit into the already voiced result. I hope that doesn’t happen,” Chizhov said.

The Malaysia Airlines plane with 298 people on board, including 15 crew members, crashed on July 17 near the town of Torez in Ukraine’s Donetsk Region.

Ukrainian government and militia have been trading blame for the alleged downing of the airliner, with independence supporters saying they lacked the technology to shoot down a target flying at altitude of 10 kilometers (6.2 miles).

Russia’s Defense Ministry said that at the time of the Boeing crash, Ukraine’s military had at least 27 Buk missile launchers capable of bringing down high-flying planes stationed in the Donetsk Region.