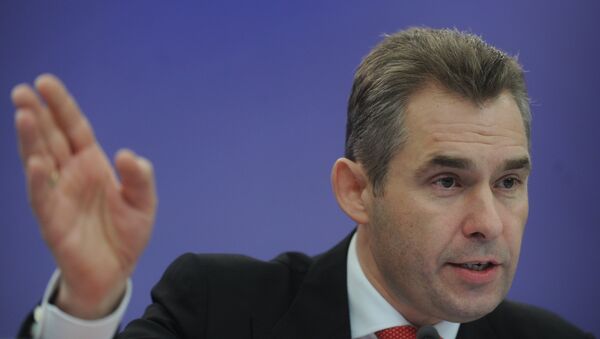 © RIA Novosti . Alexander Utkin
/
Go to the mediabank
Subscribe
International
India
Africa
More than 200,000 refugees from southeastern Ukraine are in Russia, 28,700 of whom are children, Russia’s children’s rights ombudsman Pavel Astakhov said at a press conference held at Rossiya Segodnya on Wednesday.

MOSCOW, July 23 (RIA Novosti) - More than 200,000 refugees from southeastern Ukraine are in Russia, 28,700 of whom are children, Russia’s children’s rights ombudsman Pavel Astakhov said at a press conference held at Rossiya Segodnya on Wednesday.

“According to our statistics, over 201,000 refugees from southeast Ukraine are currently on Russian territory; 28,700 of them are children,” Astakhov said, referring to the figures received from the Russian regions accommodating the refugees.

He added that according to the estimates of Russia’s Federal Migration Service (FMS), more than 1.9 million Ukrainians have arrived in Russia since the start of military activities in Ukraine.

“This is a very pressing issue, since they [orphans] are the least protected children. These are the children who need an urgent evacuation. There is no difference for us where they are relocated, as long as they are moved far from the war,” Astakhov said, adding that Russia is ready to accommodate the kids and that 563 orphans have been moved to Russia.

Russian families, who provide their flats, houses and offer all the necessary help to Ukrainians fleeing violence, are also accommodating refugees.

At same time, the crisis in Ukraine has displaced 50,435 people who were forced to leave their homes due to the combat activities, according to the Ukrainian State Emergency Service.

“The total number of Ukrainian citizens displaced form the area of conducting the anti-terrorist operation to other regions, amounts to 50,435 people, including 18,218 children, 5,874 disabled and elderly persons,” the agency’s statement said.

Earlier on Tuesday, Human Rights Watch criticized Ukrainian authorities for not doing enough to tackle the issue of internally displaced people in the country, with HRW director for Europe and Central Asia, Hugh Williamson, urging Ukrainian President Petro Poroshenko to step up efforts and provide essential aid to those in need.

Since June, thousands of Ukrainian refugees have been forced to leave their native country and seek shelter in neighboring Russia due to ongoing battles between pro-Kiev forces and independence supporters in the country’s east.