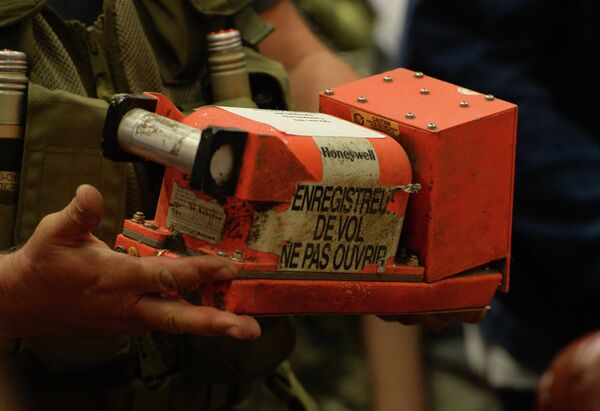 © RIA Novosti . Mikhail Voskresensky
/
Go to the photo bank
Subscribe
It will take about two days to retrieve and decipher data from flight recorders of the Malaysian airliner that crashed in eastern Ukraine last week killing nearly 300 people, a spokesman for the UK Department for Transport told reporters Wednesday.

LONDON, July 23 (RIA Novosti) – It will take about two days to retrieve and decipher data from flight recorders of the Malaysian airliner that crashed in eastern Ukraine last week killing nearly 300 people, a spokesman for the UK Department for Transport told reporters Wednesday.

Air Accidents Investigation Branch experts in Farnborough, Hampshire, will study the flight data recorders, known commonly as black boxes. The spokesman said that the process might take about two days, depending on their condition.

“Experts received flight recorders at the lab in Farnborough, Hampshire. Experts will attempt to extract data from the recorders at the request of Dutch authorities, which are conducting the investigation. Based on the damage [to black boxes] the process can take about two days,” the spokesman said.

The lab in Farnborough is one of the two in Europe that can extract data from the flight recorders of planes. The second one is in France.

Work with MH17 flight recorders will be conducted with special precautions. The room will be sealed and only those whose direct responsibilities involve working with the recorders will be allowed in. Four speakers will be working in surround sound mode and help the experts to hear every detail, including a possible explosion outside the plane.

On July 17 Malaysia Airlines Flight MH17 crashed near the town of Torez in Ukraine’s Donetsk Region killing all 298 people on board.

Ukrainian government and militia have been trading blame for the alleged downing of the airliner. Russia believes the investigation should be carried out by an international group of experts under the aegis of ICAO