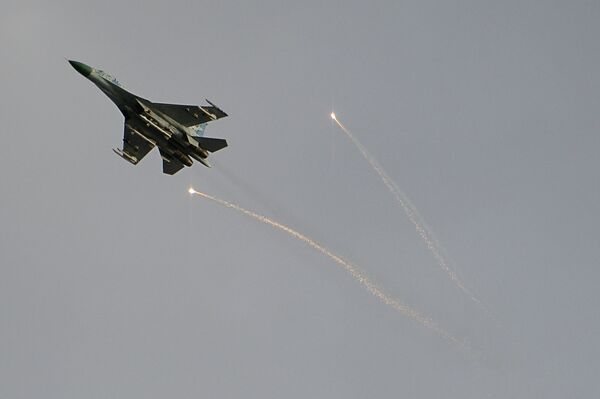 A Ukrainian Sukhoi fighter jet delivered a rocket near the city of Shakhtarsk, located within the 40-kilometer ceasefire zone around the site of the downed Malaysia Airlines passenger jet, a RIA Novosti correspondent reported Tuesday.

TOREZ, July 22 (RIA Novosti) – A Ukrainian Sukhoi fighter jet delivered a rocket near the city of Shakhtarsk, located within the 40-kilometer ceasefire zone around the site of the downed Malaysia Airlines passenger jet, a RIA Novosti correspondent reported Tuesday.

The rockets struck a field outside the city. No injuries have been reported so far.

The city of Shakhtarsk, population 61,000, is located 30 kilometers from the crash site of a Malaysia Airlines Boeing 777 in eastern Ukraine.

The Ukrainian military and independence supporters agreed on Monday on a ceasefire within a 40-kilometer zone around the crash site to provide access to the area for the international investigators.

The republic’s prime minister, Alexander Boroday, and Andrei Purgin, his deputy, signed a handover agreement, stating that experts from the UN’s International Civil Aviation Organization (ICAO) are to get access to them.

The head of Malaysia’s delegation said the black boxes appear to be in a good condition.

Malaysia’s Prime Minister Najib Razak said in a statement that authorities of the Donetsk People’s Republic provided international investigators with safe access to the crash site.

Ukrainian authorities place the blame for the crash on independence supporters in the country’s eastern regions, while the latter maintain they do not have the means to shoot down a plane flying at 32,000 feet.

Russia urged Ukraine not to use the crash for political goals and called for a thorough investigation under UN’s International Civil Aviation Organization (ICAO) auspices.

Late Monday, the UN Security Council condemned the downing of the passenger plane and unanimously voted in support of a thorough and independent international investigation of the incident.

The 15-member council said in a resolution it “supports efforts to establish a full, thorough and independent international investigation into the incident in accordance with international civil aviation guidelines.”