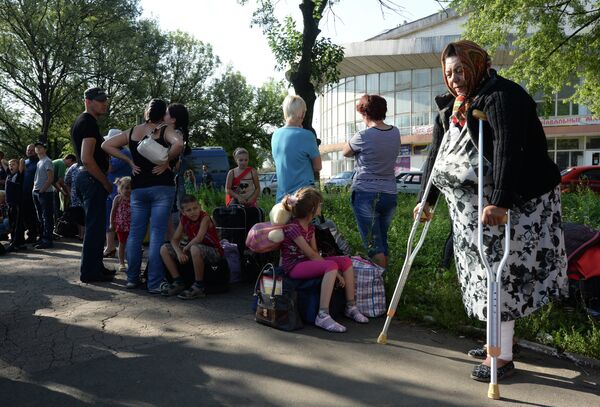 © RIA Novosti . Mikhail Voskresensky
/
Go to the photo bank
Subscribe
Russia is going to spend more than 4.9 billion rubles ($140 million) to address the issue of refugees as thousands flee hostilities in eastern Ukraine, according to Russian Prime Minister Dmitry Medvedev.

“The government has already earmarked over 4.94 billion rubles for resolving refugee-related problems. It is a considerable sum of money,” Medvedev said on Tuesday.

He added that a further 780 million rubles (roughly $22.2 million) would be given to Russia’s Federal Migration Service (FMS), who has been ordered to receive Ukrainian fugitives at the border with Donetsk and Luhansk, and provide to them with all necessary aid and temporary shelter.

The influx of Ukrainian refugees to Russia, in particular to the bordering Rostov Region, has risen in June as the fighting intensified. Approximately from 500 to 1,000 people are being accommodated in the region on a daily basis.

The human rights watchdog acknowledged that Kiev made an effort to help refugees, but added it was not enough.