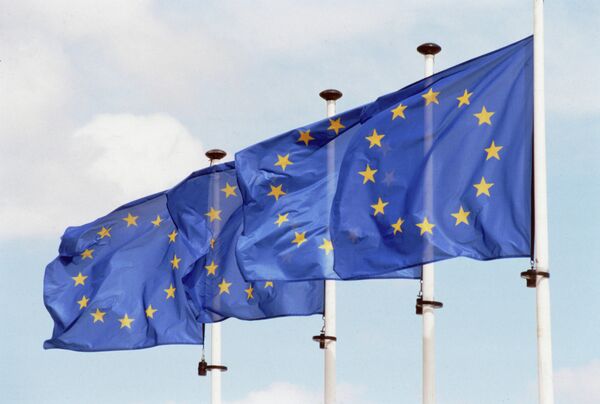 © Photo : EU's official website
Subscribe
Foreign ministers from the European Union will introduce additional measures to restrict trade and investment in Crimea and Sevastopol, according to the statement issued after the Foreign Affairs Council meeting in Brussels on Tuesday.

MOSCOW, July 22 (RIA Novosti) - Foreign ministers from the European Union will introduce additional measures to restrict trade and investment in Crimea and Sevastopol, according to the statement issued after the Foreign Affairs Council meeting in Brussels on Tuesday.

“The Council agrees … to adopt additional measures to restrict trade with and investment in Crimea and Sevastopol, at the latest by the end of July,” the statement said.

The Council will also accelerate the preparation of measures that will establish “a list of entities and persons, including from the Russian Federation,” and “then to expand the restrictive measures with a view to targeting individuals or entities who actively provide material or financial support to or are benefiting from the Russian decision makers responsible for the annexation of Crimea or the destabilization of Eastern-Ukraine.”

Crimea, previously an autonomous republic within Ukraine, refused to recognize the legitimacy of the government in Kiev, which seized power as a result of a coup in February, instead rejoining Russia after a referendum that saw over 96 percent of voters in the region back the motion to leave Ukraine.

Crimea and Sevastopol, which have a special status within the region, became subjects of the Russian Federation on March 21 after Russian President Vladimir Putin signed reunification documents into law.

Following Crimea’s reunification with Russia, the United States and the European Union imposed sanctions against a number of Russian officials and companies. Several Crimean enterprises have also been targeted by EU sanctions. Moscow has also been threatened with tougher restrictive measures that could target key sectors of the country’s economy.

Russia has repeatedly stated that the language of sanctions is "inappropriate and counterproductive" and warned its Western partners about the "boomerang effect" the sanctions would have.