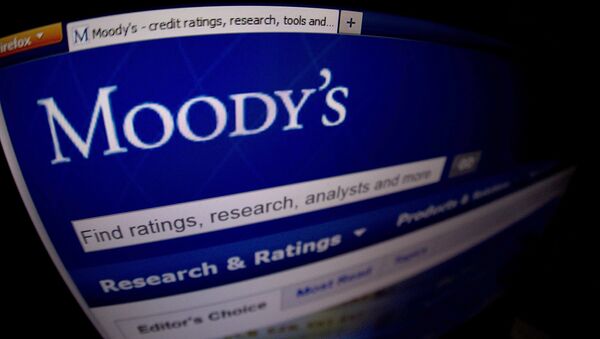 “The sanctions are credit negative for the two banks [Vnesheconombank and Gazprombank] because they will restrict the banks’ access to the US financial markets and create difficulties in European capital markets,” Moody’s said. “We expect the sanctions to severely limit these banks’ nondomestic funding options and hurt their liability structure.”

The agency notes, however, that the effect of sanctions will still be limited.

“Because of both banks’ limited reliance on the US market for funding, their currently good liquidity and relatively modest refinancing requirements in the international markets, the sanction’s effect will be limited,” Moody’s said.

Last week, Standard & Poor's issued a statement saying that the new sanctions imposed by the US against Gazprombank, Vnesheconombank, Novatek and Rosneft did not affect the companies’ ratings.

“Standard & Poor's Ratings Services said today that its existing ratings on Vnesheconombank (VEB), Gazprombank, Rosneft International Holdings Limited (Rosneft), OAO Novatek (Novatek) and their respective subsidiaries are not currently affected by new sanctions imposed by the US Treasury on July 16, 2014,” the ratings agency said in the press release.

However, S&P noted that the sanctions could negatively affect “these entities' future capital markets access.”

Last week, the US Treasury introduced a so-called Sectoral Sanctions Identification List that targeted the defense, energy and banking sectors of the Russian economy. The West sees sanctions as an adequate response to Moscow’s alleged involvement in the Ukrainian crisis.

Sanctions were first introduced this March after Crimea’s reunification with Russia that followed a public referendum that overwhelmingly supported the move.

The West then threatened to extend the sanctions, despite the Russian Foreign Ministry saying that their use is counterproductive and would also hurt Europe and the United States.

Russian President Vladimir Putin said the new sanctions required a careful look but warned that they could bring US-Russian ties to a dead end.